Owensville, OH -- (ReleaseWire) -- 02/23/2016 --Box Top Wesley, a local kindergartner on quest to collect one million box tops, announced today that he's collected almost 60,000 box tops since he launched the effort in mid-September. Packages have been received from all 50 states and the kindergartner, with the help of his parents, is personally thanking every contributor via his Facebook page.

Box Top Wesley attends Clermont Northeastern Elementary School in Batavia, Ohio, a rural school with limited resources and a high population of students living near or below the poverty line. Wesley, just five years old, hopes that the box top campaign will help the school to acquire new computers and other much-needed resources and supplies.

Box Tops for Education was first launched in 1996 by General Mills to support education and benefit America's schools. Participating schools have earned over $719 million through the program by collecting box tops from hundreds of products found in grocery stores across the nation. A full list of eligible products is available at www.boxtops4education.com/earn/participating-products.

"One million box tops is a big goal, but I know that I can reach it by doing my best and having fun," said Wesley. "I'm hoping that everyone will help by sending their box tops and also by telling their family and friends about my goal." 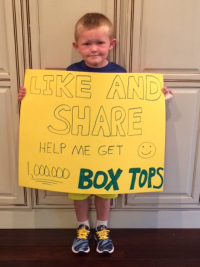