Breanna Baker a Hit on YouTube in a Little Heart

Los Angeles, CA -- (ReleaseWire) -- 05/02/2016 --A Little Heart, starring Breanna Baker, has burst out of the gate on YouTube with viral momentum only a day after director Annette Prieto's touching short film was posted on the popular video-sharing website.

After its theatrical premiere at CSU Monterey Bay's Capstone Film Fest in December, A Little Heart found its way onto Youtube April 28, garnering nearly 6,000 views in its first 24 hours.

The film follows Gabby (Baker), as aspiring photographer who enters an old building in search of inspiration. Instead of finding the perfect shot, she discovers a marimba, which reignites her former passion for music.

A natural choice for the role, Baker studied percussion as a musical performance major in college, and is now an accomplished photographer, in addition to her careers in modeling, acting, and talent management. She also served as a behind-the-scenes photographer during the filming of A Little Heart.

"It was fun, but it's definitely a lot of work," Baker told The San Francisco Post regarding her work on the film. "Whenever there was time between takes…I'd be learning the next page of music, taking pics of the crew, or going over lines with my co-star." She added, "The crew said they've never seen a lead actress double as the BTS photographer." 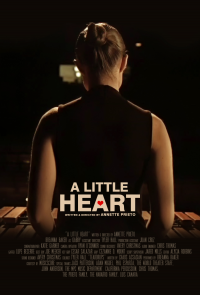