New York, NY -- (ReleaseWire) -- 02/24/2021 --Producer Mark Cortale has announced that six stars of the stage and screen will join the late-February - March 2021 line-up of The Seth Concert Series, the live weekly series based on Seth Rudetsky's international Broadway series that began at The Art House in Provincetown ten years ago. Brian Stokes Mitchell, Tony Award winning star of Kiss Me Kate, Man of La Mancha, and Ragtime, will make his series debut on February 28. Eva Noblezada, Tony nominee for Hadestown and Miss Saigon on Broadway and star of the Sony Pictures film Yellow Rose, debuts in the series on March 7. Emily Skinner, Tony nominee for Side Show and star of Broadway's The Cher Show and Billy Elliot, makes her series bow on March 14. Jackie Hoffman, award-winning Broadway star of Hairspray, On The Town, and The Addams Family, and Emmy nominated star of FX's Feud: Betty and Joan debuts on March 21, and Ashley Spencer, who has starred on Broadway as Sandy in Grease and Amber in Hairspray, returns to the series with special guest Kara Lindsay on March 28. For additional information and to purchase tickets, please visit thesethconcertseries.com.

Each weekly show premieres live on Sunday afternoons at the new time of 3:00 PM EST with a one-time rebroadcast on Sunday nights at 8:00 PM EST, except where otherwise noted. Tickets are available at thesethconcertseries.com for $25.00 each. As a premium, VIP tickets that include "behind-the-scenes" access to the artists' soundcheck are now on sale for each of the February and March lineup's stars.

Also, a Student Discount is now available for all shows announced in The Seth Concert Series, providing an additional 40% discount to registered students with a .edu email address by using the code STUDENT when signing up for a BroadwayWorld account.

Dubbed "the last leading man" by The New York Times, two-time Tony Award-winner Brian Stokes Mitchell (performing February 28) continues to enjoy a 40-year career that spans Broadway, television, film, and concert appearances. He received Tony, Drama Desk, and Outer Critics Circle awards for his star turn in Kiss Me, Kate. Stokes also has Tony-nominated performances in Man of La Mancha, August Wilson's King Hedley II, and Ragtime, and he was recently inducted into the Theatre Hall of Fame. Other notable Broadway shows include Kiss of the Spider Woman, Jelly's Last Jam, and Women on the Verge of a Nervous Breakdown. In 2016, Stokes made a long-awaited return to Broadway in Shuffle Along and received his most recent Tony Award that year for his work as Chairman of the Board of the Actor's Fund. An extremely versatile singer, he has performed nationally at venues spanning jazz, opera, pops, country, and musical theater worlds including two performances at the White House. Stokes has appeared on more than 20 albums and his musical creativity as a vocalist has been extended to include producer, arranger, and orchestrator on all 3 of his solo albums, including his new release, Plays With Music.

Eva Noblezada (performing March 7) stars in the title role for director Diane Paragas in the recently released award-winning Sony Pictures film, Yellow Rose. She was nominated for a Tony Award for starring on Broadway in Hadestown. It was her second Tony nomination in two Broadway roles, following her earlier nod in the title role in Miss Saigon in 2017. She was previously a lead in Hadestown at the National Theatre in London after starring in the West End revivals of Miss Saigon and Les Miserables. Noblezada was a high school student in Charlotte, NC, when she was discovered by casting director Tara Rubin at the 2013 Jimmy Awards in NYC.

Emily Skinner (performing March 14) starred most recently on Broadway in The Cher Show in 2019. In 2017 she had the honor of being directed by Hal Prince in his last show Prince of Broadway at Manhattan Theatre Club (Outer Critics Circle nomination) and also appeared that season Off-Broadway in Transport Group's critically acclaimed Picnic (Drama Desk nomination). Emily starred as The Witch in Into The Woods at Houston's Theatre Under The Stars and as Phyllis in Follies at The Repertory Theatre of St Louis, workshopped the new musical SCKBSTD by Grammy winning singer/songwriter Bruce Hornsby and created the role of Monique McCandless in Stephen King & John Mellencamp's musical The Ghost Brothers Of Darkland County at the Alliance Theatre. Dame Julie Andrews selected Emily to star in the musical based on her children's book The Great American Mousical, which premiered at Goodspeed. She starred previously on Broadway in the musical Billy Elliot (Broadway World Award) and was nominated for a Tony Award (along with Alice Ripley) and received a Drama League Award for her performance as Daisy Hilton in the brilliant but short-lived Side Show. Her other original Broadway credits include Jekyll & Hyde, James Joyce's The Dead, The Full Monty, Dinner At Eight, A Christmas Carol, as well as The Actors Fund productions of The Best Little Whorehouse In Texas, and Dreamgirls. She has performed at Carnegie Hall with The New York Pops, and in the New York debut of Richard Thomas' infamous Jerry Springer The Opera. As a soloist, she guested with the Pittsburgh Symphony, Virginia Symphony, Dallas Symphony, and the Jerusalem Symphony Orchestra. Emily has also headlined New York engagements at Merkin Hall, Avery Fisher Hall, Town Hall, Joe's Pub at the Public Theatre, Birdland, 54 Below, Lincoln Center's American Songbook Series, Feinstein's at the Regency, as well as her solo concert act Broadway Her Way at venues around the country. Her CD recordings include multiple cast albums, audio books, and animated feature soundtracks.

Jackie Hoffman (performing March 21), is best known for her Emmy nominated role of 'Mamacita' from FX's Feud: Betty and Joan, and was most recently seen onstage in the critically acclaimed Yiddish production of Fiddler on the Roof Off-Broadway. She can also be seen in Ryan Murphy's latest Netflix series The Politician, and TruTV's At Home With Amy Sedaris. Her numerous credits include The Other Two, Difficult People, Gilmore Girls, I Shudder, Girls, Six by Sondheim, The New Normal, The Good Wife, Inside Amy Schumer, Raising Hope, Melissa and Joey, On We Go, 30 Rock, Starved, Hope and Faith, Curb Your Enthusiasm, Strangers with Candy, TV Funhouse, Late Night with Conan O'Brien, Soulman and Cosby. Filmwork includes memorable roles in Birdman, Kissing Jessica Stein, Decay, The Sitter, The Extra Man, How to Seduce Difficult Women, A Dirty Shame, Garden State, Legally Blonde II and Mo' Money. On Broadway, Hoffman has co-starred in Charlie and the Chocolate Factory, On The Town, The Addams Family, Xanadu and Hairspray (Theatre World Award). She starred in six revues at The Second City Theatre in Chicago, where she won the Jeff Award for Best Actress. Her critically acclaimed solo shows at Joe's Pub include The Kvetching Continues, Jackie Five-Oh!, Chanukah at Joe's Pub (Bistro Award), Scraping the Bottom and Jackie with a Z. In 2009, Hoffman received the Mac Award for Best Female Stand Up. ?

Ashley Spencer (performing March 28) was born and raised in Canton, Ohio. She began taking dance lessons at the age of four and later became a member of the Canton Ballet Company. After graduating high school, Ashley moved to New York City to pursue her dreams as a Broadway actress. Her first job was a touring show called Barbie Live in Fairytopia. She then auditioned for Grease: You're The One That I Want!, a reality show casting the roles of Sandy and Danny in the Broadway revival of Grease. She went on to star on Broadway as Sandy, as well as Amber in Hairspray, Sherrie in Rock of Ages and one of three Divas in Priscilla: Queen of the Desert. She appeared regionally in Les Miserables, The Producers, Curtains and Crazy For You.

Seth Rudetsky is the afternoon host on Sirius/XM Satellite Radio's On Broadway as well as the host of Seth Speaks on Sirius/XM Stars. As an author, he penned My Awesome/Awful Popularity Plan and the sequel The Rise And Fall Of A Theater Geek (Random House) as well as three volumes of Seth's Broadway Diary featuring inside scoop and hilarious stories from all of the stars he's worked with. He co-wrote and co-starred in Disaster! (NY TIMES "critics pick") which also premiered to rave reviews in London. In June 2016, he and his husband, James Wesley, co-produced a recording of "What The World Needs Now" with stars like Idina Menzel, Lin-Manuel Miranda, Carole King, Audra McDonald which went to number one on iTunes and raised more than $100,000 for the Orlando shooting victims (and is still raising money. Buy it!). Seth and James have a foundation called Your Kids Our Kids that presented Concert For America; a series around the country featuring stars like Barry Manilow, Keala Settle, Stephanie Mills, Vanessa Williams, Billy Porter, Randy Rainbow and Audra McDonald that raised money for 5 non-profits that have been working relentlessly since the 2016 presidential election. They also present Voices for The Voiceless, a yearly star-studded concert for You Gotta Believe which helps older foster children find families, even if they've aged out of the system. SiriusXM/Pandora recently launched Seth's first podcast series: Seth Rudetsky's Back To School where he interviews stars about the ups and (hilarious) downs of their high school years. The first season includes Tina Fey, Allison Janney and Sean Hayes. When Broadway shut down, Seth and James started hosting / producing Stars In The House (StarsInTheHouse.com) ...a twice-daily livestream that's featured tons of Broadway stars as well as TV reunions like "Melrose Place", "Taxi" and "Frasier" and has raised more than $644,000 for The Actors Fund. You can find out more about Seth, and watch his signature "deconstructions", at SethRudetsky.com

Mark Cortale (Producer) most recently formed the developmental theatre lab NEW WORKS PROVINCETOWN and just commissioned a new musical entitled The Last Diva by Scott Frankel and Michael Korie with a book by Jonathan Tolins. He co-produced the critically acclaimed new Off-Broadway musical Midnight At The Never Get at The York Theatre in 2018, which received 3 Lucille Lortel Award nominations including Best Musical and 2 Drama Desk Nominations including Best Score. He produced Deconstructing Patti on Broadway at the Nederlander Theatre with Broadway Cares/Equity Fights AIDS starring Patti LuPone and Seth Rudetsky. He created the Broadway@ concert series in 2011 at The Art House in Provincetown where he serves as Producing Artistic Director. The series also premiered in 2013 in New Orleans, in Australia (Sydney & Melbourne) with Megan Mullally and in London's West End with Patti LuPone at the Leicester Square Theater. The series has since travelled to cities that include Chicago @ The Steppenwolf, Beverly Hills @ The Wallis, Fort Lauderdale @ The Parker Playhouse, San Francisco @ The Herbst Theater and Scottsdale @ Scottsdale Center for the Arts. In the 2018/19 the series launched in Boston @ the Huntington Theatre with Chita Rivera and at The Town Hall in New York City with six-time Tony Award winner Audra McDonald. Mark has produced international drag sensation Varla Jean Merman for the past twenty years and also produces the singing string quartet Well-Strung, which he founded. Info at markcortalepresents.com.

The Seth Concert Series is sponsored by BroadwayWorld and StreamYard.

JACKIE HOFFMAN with SETH RUDETSKY
Sunday, March 21st Live at 3PM EST and Rebroadcast at 8PM EST
(Warning: Strong language may be used during the performance.)

All tickets available at thesethconcertseries.com 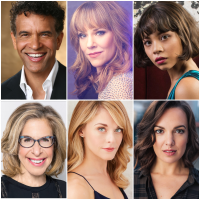