West Midlands, England -- (ReleaseWire) -- 02/22/2013 --The Brit Awards has worked as something of a fashion parade in previous years for the great and the good of the music industry. Keen to impress, musicians and artists have been known to make slightly rash and ill-judged decisions regarding their personal appearances and styles. Last night was no exception as a litany of stars toed the line between hair success and disaster. Whilst many people’s eyes were drawn to Emili Sande’s impersonation of the candle from Beauty and the Beast, the lads didn’t disappoint last night. Here are the good and the bad from last night’s awards.

Love him or loathe him, every day there are thousands of young males entering Barber shops with a picture of Holmes Chapel’s most famous export. Whilst his wild locks may sometimes make it appear as though Styles has just fallen out of bed, his tangle of locks require significant upkeep. The curly haired rapscallion has an army of female admirers just purring at the opportunity to ruffle his feathers. Styles and his band mates enjoyed a successful night picking up the gong for the Global Success Award.

Life can be difficult for the gingers. Merciless teasing at school is almost guaranteed for the copper-headed. The temptation to make regular pilgrimages to the Hairdresser with the simply instruction to ‘just get rid of it’ must be great. However Sheeran has managed to find a small niche to make ginger curls cool. Eschewing the shaved John Hartson look and the long hair with beard combo found most commonly in Games Workshop, Sheeran has come out of the opposite end with a big smile on his chubby chops.

Scooping the Critic’s Choice award ensures that last night will be a night that Odell never forgets. However, his Hanson inspired haircut is one that he will quickly want to forget. Even if Odell turns out to be a global megastar, it seems unlikely that his hairstyle will resonate with fans in the same manner as the Bieber cut. It may be advisable for Odell to make an appointment at his local Hairdresser if he is to build on his recent successes.

Mumford and Sons have had an incredibly successful 2013. Bemusing winners of the Americana award at the Grammys, the UK band has seen their style of soft folk take the world by storm. Unfortunately, it is time that they bit the bullet and at least had their beards styled. Rumours have it that much of last night’s award ceremony dinner is still stuck in their beards. 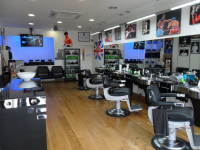