New Orleans, LA -- (ReleaseWire) -- 12/01/2016 --The stars will continue to shine on New Orleans this season. Broadway's Gavin Creel, Olivier Award Winning star "The Book of Mormon" and star of "She Loves Me" will perform on December 15 at 7:30 PM. Creel will perform with Sirius XM Radio host Seth Rudetsky at the piano prior to his return to Broadway where he will co-star with Bette Midler in the Broadway revival of "Hello Dolly!". He will be followed by Jinkx Monsoon, season 5 winner of RuPaul's "Drag Race," who will bring the smash hit show "The Vaudevillians" with cohort Major Scales on January 14, 2017 at 7:30 PM. This annual concert series has become one of New Orleans' most sought after events. All shows will be presented at NOCCA. For tickets please visit www.broadwaynola.com or call 800-838-3006. Broadway @ NOCCA also provides audiences the opportunity to purchase a Season Pass and enjoy a savings of 20% off on both shows.

In addition to their performances, Gavin Creel and Seth Rudetsky will participate in workshops with the musical theatre students attending NOCCA. Broadway @ NOCCA is sponsored by the New Orleans Hotel Collection, which encourages audiences to see a show and take a "STAYCATION" by combining a evening of theatre with a stay at one of the hotels of the New Orleans Hotel Collection, with more information at http://www.neworleanshotelcollection.com/big. Broadway @ NOCCA is also sponsored by The New Orleans Advocate.

Gavin Creel most recently starred in the Broadway revival of "She Loves Me" this past season. He won the 2014 Olivier Award and the WhatsOnStage Award for Best Actor In A Musical for his starring role in London's West End production of "The Book of Mormon" in the role of Elder Price. Of his Tony-nominated role as Claude in the smash hit Broadway revival of "Hair," the New York Times hailed him as "the pure-voiced Gavin Creel," the Associated Press noted that "Gavin Creel, besides possessing a powerhouse voice, brings a sweet-tempered poignancy to Claude". Just three years after graduating from the University of Michigan, Creel was cast in his first Broadway show – "Thoroughly Modern Millie"– as Millie's (Sutton Foster's) love interest Jimmy Smith. He received his first Tony nomination for his performance. He also appeared on Broadway in the revival of "La Cage aux Folles" as Jean-Michel, as well as the Goodman Theatre/Kennedy Center production of "Bounce," American Repertory Theater's premiere of the new rock musical "Prometheus," the New York concert versions of "Hair" and "Bright Lights, Big City," and on London's West End in "Mary Poppins" and "Hair." On television he has been featured with Julie Andrews in "Eloise at the Plaza" and "Eloise at Christmastime." His studio recordings include GoodTimeNation, Quiet, Get Out and the single 'Noise'.

Jinkx Monsoon's recent off-Broadway hit "The Vaudevillians" was a critical smash hit, about which the New York Times raved "Straight or gay, everyone leaves this show with sides aching from laughter" and called it "a pure delight," while other press hailed it as "comedic genius" (Show Business Weekly), "hilarious" (BroadwayWorld), and "intelligent and entertaining" (TheaterMania). Even RuPaul proclaimed the performance "a triumph!" Jinkx is the creation of Jerick Hoffer, a native of Portland, Oregon and a graduate of Cornish College in Seattle. It was at Cornish as a fifteen-year-old theater major that Hoffer traces the early manifestations of Jinkx Monsoon, whom he refers to as a "zany, off-the-wall, irreverent, gorgeous anachronism." In 2006, Hoffer made the Guinness World Records as lead dancer in the world's largest drag queen chorus line. By 2012, the young performer was starring at top Seattle theaters - Moritz in "Spring Awakening" (Balagan Theatre), Angel in "Rent" (The 5th Avenue Theatre), and most recently, Hedwig in "Hedwig and the Angry Inch" with the Seattle Theatre Group. Extraordinarily real, some audiences have not yet decided whether Jinkx is a woman or a drag queen. Combatting humble beginnings, struggling for social status, raising a homosexual son striving for fame as a comedian, this well-developed character has attained more than acclaim, but a life of her own.

Seth Rudetsky, has hosted the Broadway Series in Provincetown for the past six seasons, since its inception, and now nation-wide as well. He is the afternoon host on Sirius/XM Satellite Radio's On Broadway as well as the host of Seth Speaks on SiriusXM Stars. As a pianist, he has played piano for over a dozen Broadway shows including Ragtime, Les Miserables and Phantom of the Opera among many others. As a comic, Rudetsky was awarded "Funniest Gay Male in NY" at Stand-Up NY and is a three-time Emmy nominee as a writer for The Rosie O'Donnell Show. His newest book, The Rise and Fall of a Theater Geek was published by Random House and is available on Amazon.com. He co-wrote and starred the critically acclaimed new musical "Disaster!" this season on Broadway, opening this month on London's West End.

About NOCCA
NOCCA is a professional arts training center that has been changing the lives of young people since 1974. NOCCA provides intensive instruction in Classical Music, Creative Writing, Culinary Arts, Dance, Drama, Jazz, Media Arts, Musical Theatre, Theatre Design, Vocal Music, Visual Arts, and academics to students from public, private, and parochial schools across Louisiana. Students attend via school day, after-school, and summer sessions. Admission to NOCCA is by audition, and there is no tuition. More info at http://www.nocca.com/. Ther ane NOCCA Institute is NOCCA's nonprofit partner, providing supplemental funding for NOCCA and advocacy for its world-class program. Some of the Institute's more notable endeavors include: a comprehensive Financial Aid Program that funds students' supplies and fees associated with important summer training programs across the country; an Artists-in-Residence Program that brings more than 100 professional visiting artists into NOCCA's classrooms each year; the capital campaign for NOCCA's current home and expansion projects along the Press Street corridor, including Press Street Station, 5 Press Gallery, and Press Street Gardens; and concert, gallery, and literary events for the community. We also oversee rentals of the NOCCA campus, making it available to arts organizations, individuals, corporations, and other groups. More info at http://noccainstitute.com/ When looking for what to do in New Orleans in December and January, the Broadway @ NOCCA concert series is a "must-do" event in the city.

About The Broadway Series
The Art House in Provincetown, MA, under the leadership of Producing Artistic Director Mark Cortale, is the original home to the internationally acclaimed Broadway @ The Art House series hosted by Seth Rudetsky. In its sixth season this past summer, the series presented Broadway superstars like Audra McDonald, Kristin Chenoweth, Patti LuPone, Matthew Morrison, Cheyenne Jackson, Megan Hilty and Vanessa Williams. The Broadway @ series also premiered in 2013 in New Orleans, in Australia (Sydney & Melbourne) with Megan Mullally and in London's West End with Patti LuPone at the Leicester Square Theater. The series has travelled to Fort Lauderdale (The Broward Center), Philadelphia (The Kimmel Center), San Francisco (The Nourse Theatre) and this summer it had its inaugural season at the Martha's Vineyard Performing Arts Center. 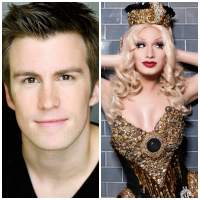