New York, NY -- (ReleaseWire) -- 10/17/2014 --TubeTnr, a pioneering startup dedicated to providing a safe and encouraging environment for musical artists around the globe, has announced a special contest to coincide with National Bullying Prevention Month. Open to anyone with musical talent and a desire to combat negativity online, the competition provides promotional opportunities for up to 10,000 musicians, as well as prizes for the best entries in two categories.

“TubeTnr was created with the specific intention of giving young musicians a platform where they could share their talent and be promoted by their fans without having to fear the mean-spiritedness and bullying that is so often a part of the online experience,” says co-founder Lee Zinser. “It’s only natural that we would want to do something special for National Bullying Prevention Month, which resonates so deeply with our reason for being.”

To enter the contest, TubeTnr users can submit either an original song dealing with the idea of overcoming adversity, or a cover version of one of three popular songs wit the same theme; Shake it off, Skyscraper, or Titanium. Three winners from the covers and originals will receive $50 iTunes gift cards. Equally importantly, all participants will have the opportunity for their work to be promoted on TubeTnr, YouTube, and a wide variety of social media involved with anti-bullying and emerging artists.

“We really want to encourage people to join us and to share their work,” says Zinser. “It’s a great way to make a statement in support of a great cause, and a great way to get your music out in front of people. Everybody wins.”

To enter the competition or for more information, please visit TubeTnr.com

About TubeTnr
TubeTnr was developed over the past year by an international team of programmers, designers, video producers, managers, engineers, and administrators from Asia, South Africa, Europe, Australia, and the U.S. While initially focusing on music, TubeTnr will gradually be expanded to other genres, including art, design, fashion, and sports. The site is currently available in a desktop and mobile version. TubeTnr Uploader is available in the Apple app store. 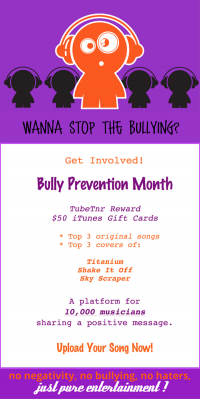