Offering consumers and businesses a way to reclaim complete control of their finances California Coin launches to be the new “it” crypto currency for California residents.

Ultimately designed to benefit California’s large economy which already is the 8th largest in the world, the new crypto currency also happily opens its digital doors to users regardless of their location.

Based on LiteCoin’s secure open source code, California Coin enables miners to use any computer’s CPU or GPU unit to get in on the game and make some money. Users simply need to download the California Coin wallet and retrieve their unique CAC receiving address. This is basically a digital bank account with one difference; the value of these coins can grow exponentially without any effort, unlike your bank account.

From there, anyone that lives in California can claim their free Airdrop coins by replying with their CAC address to California Coin’s BitCoinTalk thread. To visit the thread click on
https://bitcointalk.org/index.php?topic=589672.0

Alan Jordan, founder of California Coin had this to say of the new digital monetary system, “Crypto currencies have monumental potential. The surge in Bitcoin’s value made millionaires out of people who gathered them early on. DogeCoin started out as a joke currency based on a meme, now they have their own Nascar. California Coin has so much potential it can do a lot of good for small & big businesses all over the world!”

California Coin was re-launched in May of 2014 to add additional SSL features that provide even more security for its users. Block time and retarget time issues were addressed as well so that sending and receiving is virtually instantaneous.

Jordan adds, “We’ve made improvements to the code to make sending and receiving payments faster and more secure. California Coin offers so many benefits. Just two of which are, it can’t be counterfeited or stolen. “

Jordan also mentioned, “Unlike BitCoin, California Coins are confirmed much quicker, up to 400% faster thus making it an excellent choice for brick & mortar type businesses to accept the digital currency!”

“People don’t need to wait around for minutes anymore to receive their money like with BitCoin. People receive the money in just a few short seconds when using California Coins.”

This is a major advantage for brick & mortar businesses as transactions can be completed just as quick as a credit card swipe with less fees. Every time a business swipes a customer’s credit card they are nailed with a transaction fee that is usually 3%.

California Coin enables businesses to save big money by dodging those fees. The amount a business can save by switching to a digital currency like California Coin is astronomical!

California's economy is the 8th largest economy in the world (even bigger than Russia’s economy) if the states of the U.S. were compared with other countries.

As previously mentioned, any California resident may claim their free California coins by posting their CAC address in our BitCoinTalk thread. To visit the thread click on https://bitcointalk.org/index.php?topic=589672.0

On August 6, 2013 Magistrate Judge Amos Mazzant of the Eastern District of a Texas Federal Court ruled that because cryptocurrencys can be exchanged for government issued currencies, cryptocurrencys could be considered real currency.

California Coins can be used by people all over the world whether you have a PC, a MAC, or you’re running Linux, check out the download links below to download your California Coin wallet today and get in on the digital gold rush! 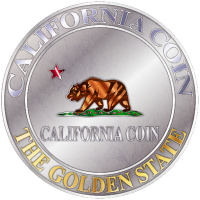