Can Magic Encourage Children to Read?

Mechanicsburg, PA -- (ReleaseWire) -- 06/02/2015 --The noted children's entertainer Nicholas Pugh a.k.a. "Magical Nick" is pleased to announce his new campaign entitled the Magical Bookmark. Through this campaign, Nicholas hopes to encourage children to become more interested in reading books. He plans on getting young children interested in reading before they can even read a book on their own by showing them how reading can be magical.

Each month, Magical Nick performs in front of thousands of young children. During his future shows, he will hand out custom bookmarks to every child while stressing the importance of reading and learning through magic. The bookmarks will allow children to write their favorite books on the back. Nicholas does not plan on ending the campaign anytime soon when he mentioned that it will continue as long as he is still performing. He believes that he will be able to get a positive message to the children by incorporating it with laughter and fun.

"In the information age of today, kids have so many distractions in their daily life." said Nicholas Pugh. "I see young children talking on cell phones or playing on iPads and I can't help but think back to my childhood when a trip to the library or playing outside was our version of fun. I believe that children can learn to appreciate a good book or learning by removing their eyes from the screen and taking a look at the world around them."

About Magical Nick
Magical Nick is a local magician residing in Mechanicsburg, Pennsylvania. He began his professional career as a children's entertainer in 2013 and his shows have since become one of the most popular attractions at birthday parties and major children's events. One of Magical Nick's most noted performances was at the annual Easter Egg Roll held at the White House where he performed for over 35,000 guests. He is a member of Kidabra International and shares his passion of giving back to the community by partnering with children's charities such as the Ronald McDonald House.

To find out more information about Magical Nick visit his website directly at http://www.magicalnick.com 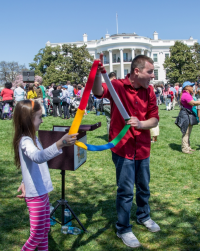