How did a Canadian musician end up on a Brazilian record label? The founder of Schtum Logic Records, Luis Tavaras, discovered Harris’ Eccentric Genius account on SoundCloud.com, and approached him with the idea of creating an EP. “The very first time I heard his music I was blown away,” says Tavaras. “It is a very well constructed experimental kind of stuff … a minimalism with such a perfection that I was not able to resist to get him on board. Kaden Harris is a professional in his craft, and I believe this is just the beginning of many more EP´s to come.”

Harris adds, “Schtum Logic's in Brazil. I'm in East Van. This entire project came together over the course of maybe a dozen emails. The Internet effortlessly globalizes small record labels to a degree that rightfully gives the majors the willies. It's a good time to be a musician.“

Ontario native Harris, a graduate of University of Toronto, is a fixture in Vancouver’s dark ambient music scene, having played in a succession of fully improvisational ensembles including Cable Bomb, WetWare, and DVOA with Mark Spybey. “I’m known for a technologically overachieving hybrid electro-acoustic drum set so large that it can be seen from space,” says the multi-instrumentalist, but for the past three years he has devoted himself to developing a “close personal relationship” with the Korg WaveDrum. “The WaveDrum is an electronic percussion instrument that has changed the way I think about music,” Harris says. “It is a startling instrument that sounds like nothing else on Earth, yet is just as organic and responsive as a vintage acoustic hand drum…with a timbral palette from a parallel universe.”

The Hastings Sunrise neighborhood resident is also known as a eccentric “improvisational fabricator.” Though he has a reputation for creating executive gifts such as desktop trebuchets, cigar guillotines and hypno-disks out of industrial castoffs and found objects, Harris’ most recent work involves the freeform fabrication of otherworldly musical instruments, including electric kalimbas (finger pianos), a one-string upright bass, and a hammered dulcimer variation he calls a Pseudo Psantur.

His finger pianos are constructed of walnut, with salvaged brass and copper, and tines cut from Zildjian B20 cymbal bronze. He electrified the instruments with handmade pickups built from deconstructed electronic window alarms. The upright bass and Pseudo Psantur are still in the prototype phase, but Kaden Harris’ electric kalimbas are now available for purchase at www.KadenHarris.com/instruments.

About Kaden Harris
Kaden Harris is a writer, musician, and visual artist living and working in the Hastings Sunrise neighborhood of Vancouver, British Columbia, Canada. He is the author of Eccentric Cubicle: Projects and Ideas to Enhance Your Cubicle World, a how-to manual for improvisational fabricators. Kaden Harris' kinetic sculptures, musical instruments and otherworldly mechanisms are included in the collections of Gemini award winner Celine Godeau, Canadian science fiction writer Cory Doctorow, Grateful Dead drummer Mickey Hart, and in the permanent collection of The Exploratorium in San Francisco. 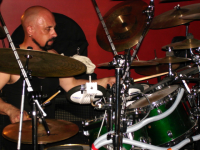 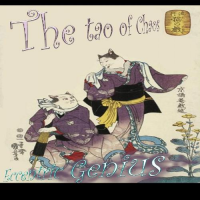