Canadian-born talent now residing in Southern California with a vocal style reminiscent of Jack Johnson, Dave Matthews, Van Morrison and others decides to give away his new EP to fans who saved him.

Temecula, CA -- (ReleaseWire) -- 03/31/2016 --Exhibiting a fiercely independent nature and raised in the rural blue-collar community of Chatham, Ontario in Canada, Michael LeClerc has been playing music since the age of seven, responding to what he described was his fundamental calling.

LeClerc now resides in Southern California, where he applies his style that's reminiscent of Van Morrison, Dave Matthews and Jack Johnson – among others – and his sweet and soulful voice to carving a niche for himself up and down the west coast, playing wineries, clubs and songwriter showcases from San Diego to Vancouver.

But as far as he's come in fulfilling many dreams, LeClerc continues to recall his ultra-humble beginnings, some of which included the hardships of living in a van when first arriving in Southern California.

"I decided to take a chance on my music career, and knew I had to move to a place where I could network," explains LeClerc. "Almost by default – given the number of record labels out here – this became Southern California. I didn't know anyone in California, but I knew I had to take a chance on me and my music…it had to be done without any doubts. Armed with only a few thousand dollars, the reality of having to live in a van while following my dream hit me like a ton of bricks; from replacing the van's back seats with an air mattress to sleep on and taking advantage of a gym membership so that I would have someplace to shower daily – and using a cooler for food – the journey up and down the California coast looking for opportunities was wildly challenging."

Overcoming some of the worst moments of that time including catching a particularly bad case of the flu and having nowhere to go but his van, LeClerc eventually booked himself steady paid gigs, allowing him to rent a proper room and join the more "civilized world" during his quest to become a recognized musician. Navigating the "pay-to-play" music circuit which runs rampant throughout California, LeClerc found his way as an original singer/songwriter, playing approximately 80-percent original music and the rest cover songs, growing his reputation from there.

With a voice that penetrates deeply and which exhibits a dream-like quality complemented by an acoustic guitar that drifts between deftly-executed finger style to "jangly strumming," and which segues easily from love ballad to upbeat rocker, LeClerc has since played to many large audiences including the Twilight Concert Series in Del Mar, California, noting that he's just as comfortable playing on a big stage as he is to an intimate listening room crowd. In 2011, he released Radio, his first solo EP with producer Jim Wirt, who is linked to such notables as Fiona Apple, Incubus and Hoobastank, and once local terrestrial and Internet radio picked up on the title track, LeClerc found himself on a three-month tour of California that soon segued into a permanent move.

In 2015, LeClerc released his new self-titled EP, going on to become a featured performer in Renaissance Hotels' RLife Concert Series, a program that has hosted artists such as Bruno Mars and Robin Thicke in the past. Today, this talented overachiever draws comparisons to James Taylor, Jackson Browne and John Mayer, his instant appeal and inviting stage presence beckoning the audience to come closer and listen to what he has to say.

"Getting signed in the UK would be good for me as an artist, and is one of my future aspirations," concludes LeClerc."Britain seems to be embracing my style of music, and I have heard positive things regarding the labels there and how well they treat their artists. While I endeavor to play everywhere, the UK and Europe would be a fantastic launching pad for my developing career."

For more information and to receive a Media Pack containing various high-res images for publication, please contact below. 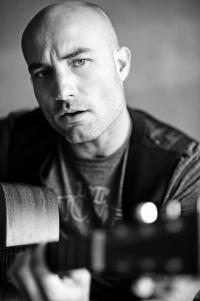