Wedemark, Germany -- (ReleaseWire) -- 08/01/2018 --She's singing the solo at the school's concert and your heart could just burst. He wobbles, and then rides his bike away from your protective arms on his own for the very first time. You're above the world watching a sunrise from a hot air balloon. Sometimes life is almost too amazing to fully take in, and when it is, your smartphone is there to catch… nearly everything. Let's face it: All too often it's the sound that gets left behind when you capture those special memories. The song from the stage is muffled in the chatter of the audience. And maybe your breathless commentary on the ascent to the heavens could have been more audible if you had spoken into your phone. But real life doesn't do second takes and it's for exactly these special moments that audio specialist Sennheiser has developed the Memory Mic, a professional wireless microphone for smartphones that is effortless to use. The lightweight and compact microphone directly picks up the person you would like to hear – at any distance from the smartphone. The accompanying Sennheiser video app can be downloaded for free from the Apple App Store or Google Play and allows you to create videos with great pictures and great sound.

"Sound plays a massively important role in videos. It instantly creates a certain atmosphere, evokes emotions, and lets you truly relive beautiful memories," said Tobias von Allwoerden, Senior Product Manager, Professional Audio at Sennheiser. "The wireless Memory Mic is as convenient and easy to use as a smartphone."

Ready immediately
For filming, the Memory Mic is simply sync'ed with the app via Bluetooth, attached with its magnetic clip to the clothing of the person you want to film – and you're ready to fill the camera roll of your smartphone with beautiful memories.

Climbing, running, cycling
Whether learning to cycle or rollicking about in the playground: The rugged Memory Mic is so lightweight it's hardly felt. Its compact size makes it an ideal companion on day trips and holidays. The Memory Mic is reliable, robust and very forgiving when the distance and direction you talk from varies. Its operating time amounts to up to four hours, then it is simply recharged via the USB connector. After an hour, the battery has already reached 70% of its full capacity and the microphone is ready to record the next adventures!

The Memory Mic comes complete with a USB charging cable and a quick guide. The free Memory Mic app is available in the Apple App Store or from Google Play.

About Sennheiser
Shaping the future of audio and creating unique sound experiences for customers – this aim unites Sennheiser employees and partners worldwide. Founded in 1945, Sennheiser is one of the world's leading manufacturers of headphones, microphones and wireless transmission systems. With 21 sales subsidiaries and long-established trading partners, the company is active in more than 50 countries and operates its own production facilities in Germany, Ireland, Romania and the USA. Since 2013, Sennheiser has been managed by Daniel Sennheiser and Dr. Andreas Sennheiser, the third generation of the family to run the company. In 2017, the Sennheiser Group generated turnover totaling €667.7 million. www.sennheiser.com 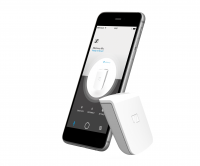