As social media platforms continue to develop, there seems to be one thing missing: a solid video-based platform. Here to help is CAPTURE, the home of awesome videos.

San Francisco, CA -- (ReleaseWire) -- 10/27/2016 --Mention social media and the first thing to come to mind are apps like Facebook, Snapchat, Instagram, and others. But the most successful * social media center seems to slip the mind of the public. This social media powerhouse is Youtube. Youtube derives its success from its ability to facilitate the free sharing of video content; unfortunately, the site itself is not conducive to community building. This flaw is what keeps Youtube from being publicly considered a social media platform. This is where CAPTURE fills its niche. The CAPTURE app embodies all the strengths of a well-designed video platform, but it promotes the interaction and structure that a social media platform needs. With this ideology, CAPTURE is truly unique. Its videos are timeless, unlike Snapchat's, longer than a minute, unlike Instagram's, and built to be shared among friends, unlike Youtube's.

Aside from simply the structure, CAPTURE stands the quality of its construction. CAPTURE will double as a high-power, low-confusion video editor, allowing any user to create beautiful scenes. The app is equipped with high-end tools like color adjustment, custom-made filters, and more. Along with this, the CAPTURE team has made adding music to video simpler than ever. All a user has to do is select a track from their iPhone's music library and it is effortlessly integrated into the users video.

The sharing of creations has also been streamlined. Videos can be posted on the CAPTURE platform and shared with friends, or it can be placed on other social media platforms like Instagram, Facebook, Youtube, Twitter, and more. However, an app of this scope requires funding to develop and improve. A version of CAPTURE is already on the iTunes app store in some locations, but money is needed to further its creation and allow its release globally. To remedy this issue the CAPTURE team has launched a crowdfunding campaign on Kickstarter. Supporters of the app will be treated with anything from a virtual ambassador badge to a CAPTURE-branded iPhone case, to a custom Apple Watch. With the support of users, CAPTURE will become a medium of social media unlike any other, enabling users to shoot, edit, share, and explore the wonders of life through video. 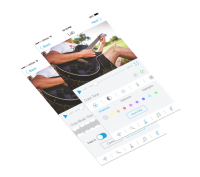