Carmen Trutanich is fed up with politicians using the office of City Attorney for their own political ambition.

Los Angeles, CA -- (ReleaseWire) -- 11/26/2008 -- Carmen Trutanich has challenged his opponent, Jack Weiss, to join him in signing a Pledge to Serve, stating that their full attention will be dedicated to serving the people of Los Angeles as their City Attorney, rather than running for other political office.

Trutanich declared, “It’s time for a prosecutor, not a politician.” The City Attorney needs to fight for the public’s interests and security, instead of using the office as a political stepping stone.

Should the pledge be violated, a penalty of $100,000 must be paid to LA’s Best After School Program from the violator’s personal funds. In addition, the candidate breaking the Pledge must purchase one full-page newspaper advertisement in every daily newspaper in Los Angeles to be run on the first Sunday following the breach of the Pledge. The ad must include a large headshot of the candidate in question, a copy of the Pledge and the words, “I AM A LIAR”, in large block print.

The City of Los Angeles must have leaders who are fully committed to serving the needs of the people. Trutanich is hoping that this Pledge will ensure that commitment.

WHEREAS Los Angeles residents deserve to have a City Attorney who will fight for the public's interest-and not utilize this office as a stepping-stone for personal political ambition to higher offices.

WHEREAS the new City Attorney must devote all of his/her time, energy and passion fighting for a safe,healthy and prosperous future for all of the neighborhoods and families living in this great city.

THEREFORE, BE IT RESOLVED AND SWORN:
We, the undersigned candidates for Los Angeles City Attorney, hereby swear to serve out our elected terms in their entirety.

We shall seek re-election to a second and final term and pledge to serve the duration of that final term.

We pledge that we will not seek any other elected position including Mayor, U.S. Congress, Attorney General or Los Angeles County District Attorney while serving as Los Angeles City Attorney.

By signing this pledge, candidates also agree to a penalty should they violate the terms and conditions outlined above. Such penalty will be a $100,000 fine payable from personal funds to LA’s Best After School Program.

In addition, violators agree to personally finance one (1) full-page newspaper advertisement in every daily newspaper in Los Angeles to be run on the first Sunday following the breach of this contract. Such ad must include a large headshot of the candidate in question, a copy of this pledge and the words, “I AM A LIAR”, in large block print.

Trutanich’s concern that people “just use the office as a political stepping stone,” and Trutanich was quoted in the accompanying release as proclaiming”[i]t’s time for a prosecutor, not a politician” to serve as the city’s chief prosecutor.

Trutanich’s campaign said that the pledge was directed at Weiss because he is the only “career politician” in the race, although it said it is “arranging” for the other four candidates to sign the pledge as well.

PAID FOR BY TRUTANICH FOR CITY ATTORNEY ID#1301975 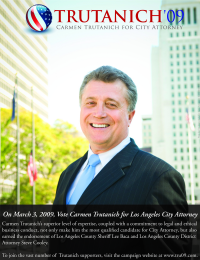