Carrot & Stick Is an Exciting Storytelling Card Game for All Ages

London, England -- (ReleaseWire) -- 10/16/2018 --Finding a game that is suitable for both adults and children can sometimes be challenging. Either the game grownups like is too advanced for children, or the game kids prefer is too juvenile for adults. Mindpipe aims to solve this problem with the introduction of its new game, Carrot & Stick.

This party-style game can accommodate up to six players, aged 7 and up, in the base game, and up to 8 players in the deluxe version. Each round has one active player who sets the scene. They draw a peep, a location and a problem the peep is currently facing. The remaining players then take turns to solve the problem and win the peep. Of course, hilarity ensues.

Players can play the game with one of two deck versions: nice and naughty. The nice version is best for children, and the goal is to tell the sweetest story possible. The naughty version is designed for players aged 16 and up, as it incorporates characters and actions that are more mature and cynical. Players also have the option of combining the two decks for a truly naughty game in which the evil characters can take disturbing actions against the sweet ones. This version is also geared towards adults.

Typical gameplay takes about 30 to 60 minutes. The winning player in each round gets to keep their character and location cards to build their story world. At the end of the game, the player with the most cards wins. Players can also win a halo or pitchfork card each round for the sweetest and cruelest stories, respectively.

The creators of Carrot & Stick have already completed the designs for all of the cards in the game and are ready to move into production. To help achieve this goal, they launched a crowdfunding campaign on Kickstarter on October 9. The campaign has a funding goal of $10,526, which it must reach by November 13. At the time of this release, the campaign had already brought in more than $3,700.

Campaign backers can get one game deck for $18 or both for $33. There is also a deluxe version of the game for contributions of $46 or more. This version includes 40 additional cards, as well as 3 additional play modes. For contributions of $178 or more, backers can get 4 custom cards in their own likeness to add to the deluxe game package. Backers will receive their rewards in April 2019. 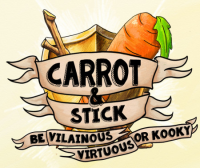