Grand Rapids, MI -- (ReleaseWire) -- 10/12/2016 --The Cat Mod is a modular, wall-mounted cat furniture system that enables users to follow the patterns created by the company or to use their own creativity to create something unique. All of the parts are interchangeable, giving the user great flexibility in how to install the system.

The system is constructed using wooden mounts connected by cotton canvas fabric. Customers have a choice between onyx, English chestnut and unfinished wood. The cotton canvas is removable for easy cleaning. It is designed to be able to withstand wear from cat claws and pouncing.

The mounting hardware is not visible once installed, giving the structure the appearance of floating. The mounting pieces attach to the user's walls at the studs, making them stable and secure. The product has been extensively tested with weights of up to 80 pounds to ensure its safety.

In addition to the basic cat climbing pieces, customers can also choose from sisal-lined escape holes, sisal climbing poles, and attachments for food and water bowls. All of the pieces are interchangeable, so they can be mixed and matched in infinite ways.

CatastrophiCreations launched a crowdfunding campaign on Kickstarter October 5, 2016. Within just the first few days, the campaign reached its funding goal of $10,000. At the time of this release, the campaign has generated over $11,000 from more than 60 backers. The campaign will continue to run until November 3, 2016, during which time it can continue to gain additional funding.

CatastrophiCreations is offering a variety of rewards for backers at different contribution levels. The first 50 donors who contribute $27 or more will receive the Lounge module in December 2016. Once the early bird options have been used up, backers can get the Lounge module for a donation of $30, receiving the product in April 2017.

More information can be found on the Kickstarter site: https://www.kickstarter.com/projects/2109380202/the-cat-mod-modular-climbing-systems 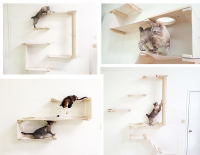 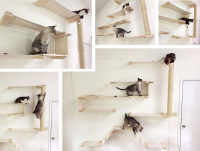 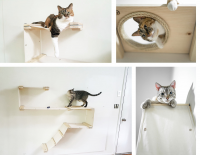