During CanJam NY in February, Sonarworks announced the addition of ten new headphone models to its software platform. The headphone profiles, which now include a total of more than 130 models including favorites from Audio Technica, Beyerdynamic, Bose, Plantronics, Sennheiser and others, are each meticulously measured and and included for all True-Fi software users, costs just $79 and is available on the Sonarworks website for purchase and download.

Sonarworks' True-Fi technology, which made its debut in the consumer market in November of 2017, removes unwanted sound coloration from headphones so consumers can experience the artists' true intentions — on a sonically balanced listening canvas. The consumer-based software — which is available on both Mac and PC platforms — was awarded 'Best in Show' in the music listening category at CanJam Europe in Berlin last November.

True-Fi takes just seconds to configure and employs measurement-based compensation profiles to correct tonal discrepancies that are caused by the headphones' physical construction. The result is 'studio reference sound' — closer to the artist's intentions and resulting in an emotionally engaging listening experience.

Coming soon to a mobile device near you

Sonarworks, which is constantly adding new headphone models to its calibration profiles, will soon be available on mobile devices at no additional charge to existing users. Further, new features such as personal listening profiles and age-based hearing compensation, will be introduced in the coming months. Currently, the software supports sample rates of up to 96kHz and the company plans to announce support of higher sample rates in the near future.

"The biggest problem music listeners experience today is not in the file and stream quality, but the playback," commented Helmuts B?ms, CEO and co-founder of Sonarworks. "True-Fi uses proprietary, research-driven technology to audibly improve the performance of loudspeakers and headphones. True-Fi stays true to the promise in its name, helping listeners experience the artists' true intention." 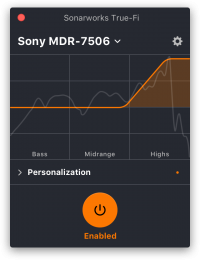