Support phati’tude Literary Magazine and our efforts to promote multicultural literature and to show our thanks, we’ll give you a free phati’tude bag or mug.

Why support phati’tude Literary Magazine? Experts in multicultural education frequently emphasize the importance of using literature to increase cultural awareness. By publishing today’s contemporary writers, readers get an opportunity to read works that accurately portray the history, customs, values and even language of a particular cultural group. Our goal is to present to the public carefully selected literature where both students and lovers of literature can better understand and appreciate a literary heritage that comes from many diverse backgrounds, promoting critical thinking skills. If you are not acquainted with phati'tude Literary Magazine, please check out previews of our issues (http://phatitude.org/online/phatitude-magazine/issues/).

We need continuing support for phati’tude Literary Magazine because costs for editing, designing, printing, distribution of subscriptions and contributors’ copies doesn't grow on trees. You can donate as much as you like, or you can donate in increments of $25, $50, $75, $100 and $150, and receive a free gift — our way of saying thanks for your support.

Please help us to support this project, which presents an incredible group of writers, has garnered great reviews, and has developed a lively group of followers and supporters, by making a tax-deductible donation today at our donation page (http://phatitude.org/online/phatitude-magazine/donate/). For more information on how you can help or other queries, contact us at donation@theiaas.org. Catch phati’tude and pass it on! 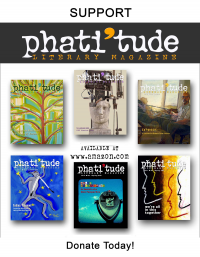