This is the award-winning duo's first dive into the world of biography, and their rhyming picture book combines "Madeline" joie de vivre with a window into the life and art of Theophile Steinlen, the renowned creator of the iconic "Le Chat Noir" cabaret poster, a ubiquitous element of the Paris scene. Steinlen was born in Switzerland in 1859 and moved to Paris in 1881 to pursue his dreams of being a fine artist. He settled in Montmartre, a thriving community of artists, musicians, writers and philosophers. Here he embarked on a prolific career as an illustrator, printmaker, painter and sculptor until his death in 1923. He is most known for his depictions of cats, his favorite subject.

Steinlen is perennially in vogue, and most have probably seen his art on cafe walls, greeting cards and calendars. Steinlen's works are in permanent collections in museums around the world. The Virginia Museum of Fine Arts recently mounted an impressive "Steinlen Cats" exhibit (with artworks from their substantial Frank Raysor collection, curated by Dr. Mitchell Merling).

Steinlen's art appeals to children as much it engages adults -- and so will this charming biography, which celebrates art, inspiration and following your creative dreams.

That's an appropriate theme for these indie creators, who formed their own boutique publishing company, Inner Flower Child Books, six years ago. Bernardo and Fletcher met in a Mommy and Me class when their kids were tots, and, since the release of their first title "Sun Kisses, Moon Hugs" in 2012, they've built a soild reputation for delivering engaging books intended to heal and inspire children of all ages. They were also featured speakers at the Los Angeles Public Library's Indie Author Day in 2017.

Indie creators Bernardo and Fletcher are currently mounting a crowdfunding campaign on Kickstarter to publish the book. They have run two successful campaigns in the past (to publish "Sun Kisses, Moon Hugs" and "The Big Adventures of Tiny House") and The Rhino Who Swallowed a Storm (a children's book to help families cope with trauma that they co-created with LeVar Burton of Reading Rainbow and Star Trek fame) pre-sold 5,000 copies and was sent to the International Space Station to be read aloud for Storytime from Space.

For more information, and to see how you can be part of bringing their latest creative vision to life, visit their publishing website www.InnerFlowerChild.com. You can also view their Kickstarter page here for more information about the project. They are offering numerous rewards, from signed books to an opportunity to have an illustrated portrait of your cat featured in the book. Several of their reward levels also benefit the ASPCA and the Book Buddies program, which encourages children reading to shelter cats.

Be sure to watch the engaging promo video, which features the voiceover talents of actor Tony Sears as "Noir the cat." Their clever Kickstarter video for The Artist Who Loved Cats might be the reason that they quickly captured a "Projects We Love" status from Kickstarter, and have garnered 70 percent of their funding goal in less than 7 days. Check out their project soon if you want to pounce on an advance copy...or check out the book in stores and libraries when it officially releases in June 2019. 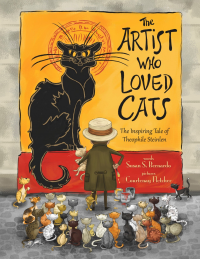 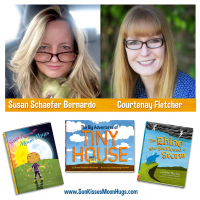