Weple users will have an opportunity to change the world while sharing their experiences.10% of all profits made by this upcoming social streaming platform will be spent on replanting the rainforests around the world.

Seattle, WA -- (ReleaseWire) -- 07/23/2015 --Weple promises to be a game-changing social media network unlike any other similar platform created so far. Capable of streaming thumbnail videos, it keeps the users connected to help them see what's happening around the world. Weple users can share their social media experiences in real-time. This will be the only streaming platform offering privacy functionality of the users based on their life and the natural navigational moments of their friends. Moreover, streaming of live videos on Weple is fun, easy, private, and safe.

In addition to its fun side, Weple is also about giving back to the Mother Earth on long-term basis. A part of profits earned by the company will be donated to support:

- Rebuilding the rainforests all over the world.
- Launching free spay and neuter trucks.
- Strengthening communities.
- Spreading good deeds and kindness.
- Brightening the world.

There is no denying the fact that climate change is one of the biggest threats at present for the planet Earth and its future. Weple is determined to do their part in sustaining and replanting Earth's rainforests and other socially responsible initiatives that help build a kinder, better, healthier World.

Rainforests are largely responsible for keeping the world's weather in check and play a key role in regulating both temperature and weather patterns. However, in the last 35 years, almost half of the world's tropical forests have been cleared. Looking at the severity of the problem, Weple has decided to get started by improving the world's rainforests.

After working extremely hard for a long time, Weple needs external funding support to create their game- changing social media streaming network. The company's primary focus at this stage is to finish and launch their iPhone App. An Indiegogo campaign with the funding goal of $35,000 has been launched recently by Weple. Proceeds from this campaign will be spent on putting the final touches to the iPhone app, finishing the Android app currently in development, and the web interface of Weple.

To find out more about this campaign, please visit http://bit.ly/1Ov7eE2

About Weple
Weple is a dynamic, fun, and game- changing social media network that outshines anything else out there on the market. It is built around streaming thumbnail videos that show what is going on around the world and connects users in cool, dynamic and fun ways. 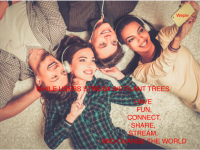