Hang Zhou, China -- (ReleaseWire) -- 07/09/2020 --Last weekend, the first stage of Enduro Rally contest, Rukla 2020 was held. CFMOTO Factory Racing Team, sponsored by CFMOTO factory, participated in it with two SSVs and two ATVs. Although this time the team was further from the winners' podium, they certainly gained new experiences and knowledge about ways to improve their machinery.

The family duet of Antanas and Audra Kanopkinai with the CFMOTO ZFORCE 1000 SPORT SSV won the fifth place in the SSV course. One place below them finished Dalius Mockapetris and Faustas Kucys.

According to Antanas Kanopkinas, the team had a variety of moments in the contest – from small mistakes to tense moments in the narrow road sections.

"Although we began to prepare our vehicles on Tuesday, work has still been carried out all night until the start of the contest. We managed to find solutions for some of the issues, however the rest still needs to be solved. Due to the rush of late night preparation, from start right to the finish, me and Audra were going only with rear wheel drive, therefore we were facing problems in speed sections as well as in the orientation part. Yet at the end of the day, we overcame the rally without any losses.The vehicles are now being taken to the service as we need to find out whether there are any damage and look for solutions to fix some issues and improve the vehicles. We are happy to learn something new each time we participate in the race.I think that Dalius Mockapetris and Faustas Kucys with an old generation CFMOTO ZFORCE 1000 performed very well. The track in some areas was more grateful for our competitors as they were driving SSVs with turbocharged engines and bigger suspension travel. In narrow areas, Dalius and Faustas had a chance to demonstrate their well-developed technical skills. It was more difficult in the sand and that is where the competitors gained the advantage over us. However, we are just starting to grow our muscles and the process of improving the vehicles are still at the early stage. We are not giving up and are definitely looking into the future challenges", said Antanas.

In the segment of ATVs, the team had to participate in pairs. Here, the CFMOTO Factory Racing Team's driver Adomas Gancierius was accompanied by his colleague Mindaugas Blockis. They both were driving CFMOTO CFORCE 1000 ATVs.

Adomas and Mindaugas didn't end up among the winners, however Adomas appreciates the 8th place out of 21 participants. According to Adomas, this time he faced the same problem as in the last contest, ATV engine was getting too hot because of the amount dust and mud. Because of that, the team is already making plans for the cooling system's modification.

"We had a very hot day. At first, everything was going smoothly, then we started taking off the protective screens on the radiators for better cooling, however they still got covered in dust and dirt frequently, so we had to stop and cool the engine from time to time. My front breaks also stopped working, but that is probably because I broke the brake line. We managed to overcome the speed sections successfully; the winches weren't used much. Although there were definitely a large amount of dust, we know that conditions were the same for everyone, so we can't complain. Overall, the race track was really good, especially the first and the fourth speed sections. Now we are going to solve the overheating problems and for that we have been thinking about installing the second radiator", said Adomas.

The CFMOTO Factory Racing Team will not have time to rest after this race. The mechanics will need to carry out the maintenance of the vehicles and apply the improvements as the upcoming weekend the racers are already leaving for Zante, Latvia, where the second stage of Enduro Rally will be held.

About CFMOTO
CFMOTO develops, manufactures, markets and delivers the world's most reliable and cost-effective motorcycles, all terrain vehicles, Side-by-Side utility vehicles, and powersports engines, parts, gears and accessories, which are distributed through more than 2000 companions worldwide. CFMOTO is edging into the advanced ranks in the world in the powersports industry and aims at supplying super products to dealers and fans globally. 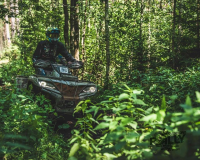