Hangzhou, China -- (ReleaseWire) -- 10/19/2020 --Last Saturday, the third stage of Enduro Rally season Pabrade 2020 was held in Pabrade. According to the press release, CFMOTO Factory Racing Team participated there and had to face serious challenges - the team members were held off by the incidents that took a lot of their time.

The participants had to overcome over 100 kilometers, which had four special tests included in them, as well as twenty control points.

The teams had to demonstrate their skills on the ground through forest roads and paths, quarter lines and wood-cutting areas. There were also boggy sand sections that were rather difficult to pass.

CFMOTO Factory Racing Team duo Antanas Kanopkinas and Audrone Kanopkiene was racing in SSV class. The team had minor technical problems yet managed to reach the finish line in the fifth position. Although attempted to claim the third place, the organizers' decision about the single point caused the team to go down by two positions.

Nevertheless, the team lent a helping hand to other teams that were facing difficulties.

"It was going well for us. We overcame the speed section ith only small mistakes and without any major incident. We had one problem though; the upgrade to our breaks that was done at the beginning of the season didn't last until the end of it - the bolts of the hub were torn off and the brake discs fell off. Other than that, everything was fine.

We are very happy to have been able to help our colleagues. We carried out a wheel replacement and pulled our competitors from the mud. Our service van was of use not only for us but also for other participants who were facing the issues", said Antanas Kanopkinas.

The race was rather dynamic for Adomas Gancierius, who was going in a pair with Mindaugas Blockis. One of the most intense moments for the team was when Adomas Gancierius crashed into the roadsidev tree with his CFMOTO CFORCE 1000 ATV. Despite moments like this, the athlete in general appreciates his performance in Pabrade.

"There were certainly a lot of participants - more than 450 and 26 teams in ATV class. I experienced a problem in the first speed section - I broke the battery holder. I was forced to stop in the speed section to fix it and that is when I lost a big amount of time. After that, I crashed into the tree and bent the front rim, the grill However, it wasn't the end - the cooling pipe started to leak, therefore we had to stop again. Luckily, it happened after the speed section, so our service van helped us. We continued the race and went collecting the points. We didn't make any navigational mistakes there and managed to overcome all the other speed sections successfully. We stayed in the thirteenth position", said Adomas Gancierius.

CFMOTO Factory Racing Team is going to have another race - the fourth stage of Lithuanian Baja - Perimetras this season.

After that, the team will make a plan for the season of 2021 and will start negotiations with their partners. The team's plans include races not only in Lithuania, but also abroad, however they will inform about the specifics of those later.

About CFMOTO
Founded in 1989, CFMOTO develops, manufactures, markets and delivers the world's most reliable and cost-effective motorcycles, all-terrain vehicles, Side-by-Side utility vehicles, and power sports engines, parts, gears and accessories, which are distributed through more than 2000 companions worldwide. CFMOTO is edging into the advanced ranks in the world in the power sports industry and aims at supplying super products to dealers and fans globally. 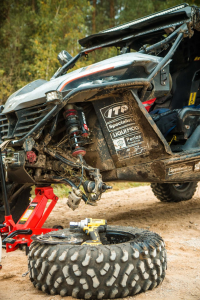