CFMOTO-KTMR2R, a Joint Venture of CFMOTO and KTM, Has Started a "New Future" in China

On 3rd August,2020, the grand opening of CFMOTO-KTMR2R(CKM) is witnessed at the new company residence. Since the establishment of CKM, all of the employees have been working hard under the leadership from the senior management so as to ensure the successful running of the projects. It's their intelligence and endeavors that brings CKM to today.

Under the witness of CFMOTO shareholders, vice presidents and senior management, CKM's General Manager Mr. Kevin Strassmeir and Deputy General Manager Mrs. Elaine Zhang cut the ribbon together, which marked the monumental moment in company's history. In the ceremony, CKM's president Mr. Minjie Lai reviewed the history and mapped the future of joint venture and also sent his best wishes. Mr. Kevin Strassmeir expressed his appreciation to all the efforts, caring and continuous support from Mr. Lai's family as the founder and the senior management from CFMOTO. He also represents KTM as the mother company to congratulate the official running of JV at the new residence. After the ceremony, the honored guests visited the new factory and listened the detailed introduction of the assembly line. Group photos have been taken in front of the hall, which came to the end of the whole ceremony.

Following the company vision of manufacturing competitive premium powered two-wheelers for global customers, CKM strives to achieve their mission of advancing the globalization and technology of the powered two-wheelers industry. With the value of diligence, proactivity, collaboration and efficiency, CKM will forge a prosperous and fruitful future and create higher value for their shareholders and the society.

About CFMOTO
Founded in 1989, CFMOTO develops, manufactures, markets and delivers the world's most reliable and cost-effective motorcycles, all terrain vehicles, Side-by-Side utility vehicles, and power sports engines, parts, gears and accessories, which are distributed through more than 2000 companions worldwide. CFMOTO is edging into the advanced ranks in the world in the power sports industry and aims at supplying super products to dealers and fans globally. 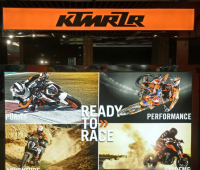