Clinton, MO -- (ReleaseWire) -- 10/18/2017 --Kemenah is now even with Dale Blaney as a six-time Arctic Cat All Star Champion, the most in Series history, Kemenah captured three victories during his 2017 Arctic Cat All Star campaign, earning 37 top-ten feature finishes in 48 main event starts.

"Our goal this year was to be consistent and we certainly accomplished that," Chad Kemenah explained during the All Star championship celebration. "It's pretty cool to go out and be competitive every time you hit the race track. I think the only thing that could have made this season even better is a few more wins. Regardless, we're thrilled. We'll celebrate this one and begin to prepare for next year."

Champion draws on the success of its racing roots in producing a line of engine oils designed for high performance racing applications and are available in numerous synthetic blends and full synthetic viscosities.

Champion Racing Oils are suitable for use in all competition and race engines especially those using flat tappet and/or roller cams operating at high RPM's and requiring high-pressure valve springs. These "purpose-built" racing oils are offered in a popular range of multi-viscosity SAE grades and formulated to meet the demands of most of today's high performance race engines.

About the series: All Star Enterprises, LLC, wholly owned by Tony Stewart, d/b/a the All Star Circuit of Champions, is a winged sprint car series. The All-Star Circuit of Champions Sprint Car Series is one of the oldest traveling 410 sprint car organizations and is a staple of grassroots, open-wheel racing. Formed in 1970 by Bud Miller, the series has largely been considered the first 'outlaw' Sprint Car organization of the modern era. After a 10-year stint as owner of the All Stars, Miller passed control of the series to Bert Emick in 1980; a reign that would continue through 2002. Guy Webb then purchased the series from Emick in the summer of 2002 and served as the series President for the next 12 years. Motorsports entrepreneur Tony Stewart agreed to terms with Guy Webb to become the sole owner of the original winged sprint car tour in January of 2015. 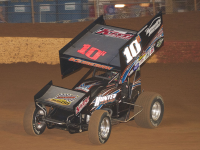