Champion Oil, a recognized leader in racing and enthusiast lubricants, congratulates Brett Hearn who boosted his career victory total to 902 Thursday night with a dominant performance in the 101-lap, $17,500 to win Mr. Dirt Track USA event at Lebanon Valley Speedway.

Hearn scooted to fifth on the original start and had shot down Phelps for fourth by the time Chad Jeseo blasted the turn three wall on lap 14 to draw the first yellow. Hearn blew by Friesen on the green, then got the crowd up and cheering when he also drove by Flach and Marshall in turns one and two.

"He sure surprised me," said Marshall. "I knew he wasn't too far back, but I didn't expect that. When I saw his nose going into one, I knew I was in big trouble. I was second in this race once before, to Billy Decker, so I've lost it to two of the best ever."

"I was as surprised as he was," added Hearn. "It just opened up. I got a huge run off four on the outside and got by Stewart, then just as I got alongside Flach, Eddie slid up and I split them. After that, the lapped cars weren't bad and my only problem was that it started to sputter towards the end. We shouldn't have been out of gas cause it sure acted like it."

Champion draws on the success of its racing roots in producing a line of engine oils designed for high performance racing applications and are available in numerous synthetic blends and full synthetic viscosities.

Champion Racing Oils are suitable for use in all competition and race engines especially those using flat tappet and/or roller cams operating at high RPM's and requiring high-pressure valve springs. These "purpose-built" racing oils are offered in a popular range of multi-viscosity SAE grades and formulated to meet the demands of most of today's high performance race engines. 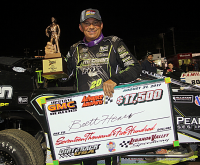