In just two months, 5rand5 has raised thousands for tax exempt charities from rewarding its donors by adding them to a random queue to receive $5.00 donations.

Atlanta, GA -- (ReleaseWire) -- 03/25/2019 --5rand5.com has grown to almost 400 users since its launch on January 2, 2019. The site is a simple random crowdfunding platform that encourages visitors to make two $5.00 donations using their CashApp account. Users have taken interest in the website as a way to give back by making a charitable donation and a random gift for a chance to get contributions themselves.

The first donation is made directly to 5rand5, ($5rand5), of which a percentage is donated to 501(c)3 tax exempt organizations that assist homeless youth and children across the United States. The site founder, Lisa L. Johnverrell, has said that the first donations will benefit a local women and children's shelter in metro Atlanta.

"We are just starting out with small community donations until people learn more about us", says Johnverrell. "Our goal is to one day raise a large amount for homeless shelters and programs across the United States, but for now we can help one family at at time."

The second $5.00 donation is made to a random donor that has already paid their contribution to 5rand5 and another previous donor. After the user makes the second donation they are automatically added to the queue to receive donations from others. Several users have already reported receiving at two to three $5.00 deposits per day since being added to the queue.

"Some people are making multiple donations and adding themselves to the queue more than once. It makes sense because as we grow, the people who have donated early will have a greater chance of receiving the most random contributions."

5rand5 wanted to make a crowdfunding platform that benefited both the charities and the people that donate to them. Johnverrell says that the queue will refresh itself three to four times a year.

"We cap the queue at 1,000 cashtags so is best to get in early. As the site grows and more people learn about what we are doing, the queue will fill up quickly."

5rand5 will make it's first donation to tax exempt organizations in April 2019. Organizations that qualify that have a Cash App account may also add themselves to the random crowdfunding queue by contacting the site directly.

5rand5 LLC was created to manage a crowdfunding platform that rewards its donors by providing them a way to receive contributions in addition to the charities it supports. 5rand5 has three dedicated employees who maintain the random queue and provide twenty-four support and outreach. The website was launched January 2, 2019 and is managed from our virtual office in Atlanta, GA, USA. 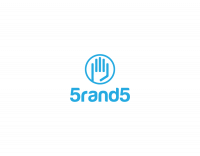