Chasing Dead to Be Released on WIIU, Steam, PS4 & VR

San Francisco, CA -- (ReleaseWire) -- 03/01/2016 --2020 Venture, an independent gaming studio is excited to announce their latest and exclusive Indie Sci-fi Action Thriller game "Chasing Dead" scheduled to be released on the 3rd of March, 2016.

2020 venture is a well-known studio expert at working on Console and Mobile games. After developing and iterating on this thrilling game for over 24 months, they believe Chasing Dead will be their first classic game as it has a lot of spectacular events packed into it.

The game begins with a strange phenomenon in which another Earth appears in our skies. The curiosity and fear of a doppelganger planet initiate multiple missions to make contact with the same Earth. A team of agents, astronauts, and scientists were sent 955,600 miles across space by NASA and the US Military. However, all contact is lost a few hours after their arrival.

Players are to play as a marine named Jake sent on a mission to retrieve any research and data left behind by the original survey team while fighting off hostile forces. As Jake, you must traverse the mutant-ridden lands of the alternate Earth as you battle endless hordes of the undead, frightening mutants and insane soldiers. As recordings and research papers are collected, players will steadily come to the horrifying revelation that lead to the parallel Earth's demise.

"We have already made significant progress in adding new features to our next patch. Upcoming features are Multiplayer, Additional Futuristic Weapons, New Enemies and Missions. Depending on the platform, VR integration would be added as well. These features would be released periodically as it clears the internal QA test." said Venture's studio rep.

A fascinating feature of the game is the "live action acting", which is an integral part of Chasing Dead's gameplay and storytelling. The game will be made available on WIIU (America & Europe) and Steam (PC, Linux, and MacOS). Also, 2020 Venture is actively working on PS4, Oculus, and another unique "Visually Impaired Version" as well. "Each platform version will be fully customized for gameplay mechanics and visuals to highlight features of the specific target platform's hardware." said Venture's studio rep.

They have promised to be listening to feedback and feature requests for the next releases. They are urging players to support them through their effort to make this awaited program a better shooting experience.

About 2020 Venture
2020 venture is an Independent studio working on Console and Mobile games. Chasing Dead will be their first big title after having worked hard on it for over 24 months. 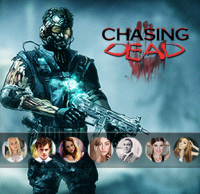