Girl with autism wanders away from home after learning to open her family's garage door installation in Culpeper, VA, but is returned home safe by police.

Culpeper, VA -- (ReleaseWire) -- 11/13/2018 --Culpeper police officer Matt Satterfield earned the thanks of a township family after finding and returning a little girl with autism, Fredericksburg news outlets have reported. The girl, 7-year-old Grayce-Anne Heheh was found playing in some muddy water on a construction site close to her family's house, police said.

According to her family, Grayce-Anne had never opened the garage door by herself before, but her father told reporters that she managed it on her own after being left in the garage by herself for less than two minutes. Her father, Rohan Heheh, said he had gone inside to fetch a towel for his daughter when she somehow managed to open the door to the garage by herself and slip away.

Mr. Heheh immediately called 911 and told them about his daughter's condition. Local police dispatched five officers to scour the area in a search that lasted about 30 minutes. Officer Satterfield reported searching nearby woods for the girl, fearing she might have been drawn to a pond he knew was located on a nearby lot.

The officer searched the property for several minutes before tripping over some barbed wire and injuring his leg. Then, he reported later, the officer slipped down a muddy bank and came to a stop in a drainage ditch, covering his entire uniform with wet clay. That's when he caught sight of Grayce-Anne, who had in fact stepped into the pond and was playing by herself. Officer Satterfield quickly made his way over and helped her out of the mud, which he described as being "like quicksand."

It isn't clear what, if anything, about the Heheh family's garage door installation allowed their daughter to open it as quickly as she did, but it only took a moment of inattention for her to get the door open and leave before her father came back to the garage. Experts in home safety warn that children can often surprise their parents by demonstrating an unexpected skill, and that garage doors can be especially prone to this kind of unwelcome surprise.

This is one reason Quality Garage Doors, of Culpeper, VA, offers free safety checks for residential garage door installations in the area. Quality's experienced technicians are available for local families who would like a thorough inspection of their garage door system for function, reliability and safety features, including child-resistant control panels and "kid-proof" vinyl panels that are extremely difficult for younger children to get through. Inspectors also check for pinch-free joints and automatic pressure sensing switches that can prevent injury to children left briefly unsupervised in the garage.

If you have children in or around the Culpeper, VA, area, it's important to never underestimate their curiosity or their ability to spontaneously master a new skill like opening the garage door. Give Quality Garage Doors a call for a free consultation and safety check, as well as to book new service for repair or a new garage door installation in the Culpeper/Northern Virginia area today. 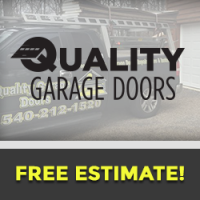