Lake Forest, IL -- (ReleaseWire) -- 08/09/2018 --On Sunday, August 19th and Monday, August 20th, 2018, the national food sport series, Culinary Fight Club, will host its annual two-day Grand Championship Competition at Morgan MFG, located at 401 N. Morgan St. in Chicago. Day one will be Culinary Fight Fest, during which 20 Culinary Fight Club champion professional chefs from nine states will bring their best "bites" – small hors d'oeuvres – for the audience to taste and vote on. The chefs with the top four bites will advance to day two, The Final Plate, where they will go head-to-head in a 45-minute mystery basket challenge, using a basket of unknown ingredients to create one champion gourmet dish. A panel of judges will vote on the winning plate and the 2018 Grand Champion will be awarded $5,000 in cash, $5,000 in prizes, competition-branded Chef coats and the coveted Culinary Fight Fest trophy. Attendees of both events will be able to enjoy small bites and appetizers created by the chefs along with samples from leading beverage brands.

The exciting lineup of 20 chefs from nine cities are:

The judges of The Final Plate are:

"It's so exciting to see these passionate chefs come together under one roof and battle it out to be named the Grand Champion Competitor of Culinary Fight Club," says Culinary Fight Club founder, Jiwon McCartney. "We are honored to have talents from nine of our nineteen CFC cities represented in 2018; it's the years must-taste event!" 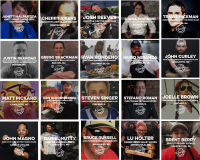