After captivating the live audience on stage for twelve years, Chico's Angels are all set to appear soon on the big screen. Their minimum funding requirement for this campaign is $300,000.

Los Angeles, CA -- (ReleaseWire) -- 08/21/2015 --Twelve years have passed since Chico's Angels appeared on the stage for the first time. They did well to impress the audience with a little loving spoof of Charlie's Angels featuring three Latina beauties. Over the years, this popular spoof has been transformed into four stage shows, a web series, music videos, numerous event performances, and several event hosting gigs. With the growing popularity of Chico's Angels, many of its fans have been requesting for a Chico's Angels movie.

The Chico's Angels team has eagerly waited for years to start making the Chico's Angels movie and the time has finally arrived. The script has been completed already, and the preparations are on to start shooting. However, funding is a serious constraint for them. Though the actual budget for this film is $600,000, the team believes that $300,000 will get the potential investors interested in this project. An Indiegogo campaign has been started to raise $300,000 for the making of the Chico's Angels movie.

Talking about the importance of funding, Chico's Angels' actor and writer Danny Casillas says, "We've got some big stuff in the script, and if we're able to raise enough money, you'll get to see all of it. The more we raise, the more amazing stuff we can put in the movie. More action, more cameos, more running from Immigration!"

A large portion of the funds received from Indiegogo will be spent on production of the movie.

To find out more about this campaign, please visit http://bit.ly/1J5wC1z

About Chico's Angels
Chico's Angels appeared on the stage for the first time over thirteen years ago. After being transformed into four stage shows, a web series, music videos, numerous event performances, and several event hosting gigs, Chico's Angels are about to hit the big screen. 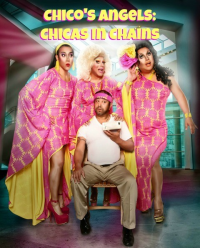