Children's Author Set to Raise $15,000 to Blast a Series of Books About a 6 Year Old Boy Into Orbit

Crowdfunduing campaign established to provide for the production of the book — Space Ranger Fred and The Shoelace Adventure, as he is keen on turning it into a series of eight that kids would love

Cape Town, South Africa -- (ReleaseWire) -- 08/19/2016 --Children love to learn new things; they have an inbuilt drive to find and master new experiences, and that is one of the reasons parents and guardians introduce their young child to books and the exciting stories, adventures and ideas that they contain. Providing stimulating reading material for children, and reading aloud to young ones is one of the best ways to create a child that will be open to different ways of doing things and one who will succeed. With a burning desire to bequeath such of these materials to kids, and to allow them to explore the adventurous world in a fascinating way, Matthew Newnham, a passionate writer, wrote and launched the book — Space Ranger Fred and The Shoelace Adventure.

However, ever since the release of the book in December 2015, many parents and kids who got absorbed with the book's content has been requesting Mr. Matt as he is fondly called, to turn the Space Ranger Fred and The Shoelace Adventure into a fantastic series. This reason made Matthew start a crowdfunding campaign on Indiegogo (https://goo.gl/L3LVVK) as he his keen on raising $15, 000 US Dollar to make the project a reality. He hopes to use the fund to provide for the production of the next few book in series of eight, which kids would love.

One of the parents who bought the on Amazon shared his experience, "My son is almost five years old, and he is at a stage where he loves the galaxy, astronauts, and aliens. We spent nearly a week reading this story together around bedtime, and he loved it. The writing is easy for him to understand, and the story is engaging. Sometimes, when reading stories as a parent, the story becomes trivial and boring. Not with Fred... I was not able to guess the next sequence of events and my son loved the story. Even if you have a reader on your hands already, I think kids would enjoy the story on their own."

Matthew provides an explanation of what the book entails and how children will benefit from it:

Space Ranger Fred and the Shoelace Adventure is an exciting science fiction novel, ideal for elementary and middle school-aged children.

"In this thrilling adventure story, we meet Fred Sanders, a six-year-old boy. Fred's biggest dream in life is to become an intergalactic space ranger. Out of boredom, Fred finds himself talking to his dog named Jupiter. He tells Jupiter that he wishes his comic book hero Zando Centauri was there to make things exciting. No sooner had he finished speaking when Zando Centauri arrives in a rocket ship, and Fred's exciting intergalactic space odyssey begins. Fred flies off into outer space with Zando. The pair visit Jupiter for refueling and then travel on to the planet Jambori where Fred meets the aging Emperor Gandori and helps him with an important shoelace tying challenge," Matthew explained.

"Spaceships, planets, galaxies, emperors, adventure..what's not to love?! Fred is the master of shoelace tying; he even teaches the emperor of a foreign planet how to tie laces... that's his sole mission..to share his talent and to show others. Helping others, and teaching others, is what this book is all about. Community and being proud of the small things, that to another may be not very small," explained another parent who bought the book from Amazon.

For more information about Space Ranger Fred and The Shoelace Adventure, and to make donations, visit https://goo.gl/L3LVVK.

About Matt Newnham
Matt Newnham was born and educated in Sussex, England and fell in love with reading at a young age. Matt now lives and works as a freelance writer and author in Cape Town, South Africa with his teenage son, Sebastian and his love of reading has now turned into a passion for encouraging others to read through his writing. 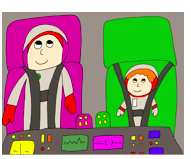