St. Paul, MN -- (ReleaseWire) -- 09/14/2015 --An award-winning author who wrote WhipEye, one of the most talked about children's fiction books of 2015 has announced the launch of his second book. Geoffrey Saign's Gorgon is the second book in the WhipEye Chronicles.

Is love just taking care of our own personal world and family, or does it mean that we should consider the good of the planet—and everyone—as a whole when deciding our actions? Is intuition just our path, or is intuition what is best for everyone?

The relationship between the two major characters Sam and Jake grows, and their conflicts expand. The world building of KiraKu and Lessers is more sophisticated. It is a cross-over book to the YA audience, with important, easy-to-understand questions in its themes and storyline that will be of value to readers of all ages.

The first book, WhipEye, recently won the 2015 International Book Award in Children's Fiction. Author Geoffrey Saign said:"It's a great feeling to have won, and I hope it draws more attention to books that highlight themes of nature and wildlife."

In Gorgon, Samantha and Jake have two days to save their poisoned parents, and only Gorgon—the cruel and scheming leader of Amazon Lessers—can help them. But Gorgon is planning to destroy KiraKu, and he pits Sam against Jake. Worse, Sam feels controlled by the supernatural staff, WhipEye, and Jake gains a dangerous weapon.

The reader is left wondering, can their friendship survive its greatest test? Can Sam and Jake stop a war and save their parents? Mysterious creatures, dragons, and Gorgon force them into a life or death adventure that some will not survive. The author takes the reader on a thrilling story about love, nature, wildlife, intuition, and trust.

The second book in the Whipeye Chronicles, which has received rave reviews is now available from Amazon as Paperback ($13.95) or eBook ($3.99) http://www.amazon.com/Gorgon-WhipEye-Chronicles-Book-2/dp/0990401324/ref=tmm_pap_swatch_0?_encoding=UTF8&qid=&sr=

About Geoffrey Saign
Geoffrey Saign who lives in St. Paul, Minnesota is an award winning author. His passion for nature and wildlife led to his nationally endorsed book, Green Essentials: What You Need to Know About the Environment, as well as his books African Cats and Great Apes. 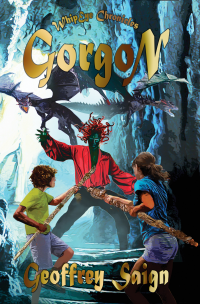