Shanghai, China -- (ReleaseWire) -- 07/09/2019 --The 2019 Silk Way Rally through China, Russia and Mongolia will start on July 6th in the industrial town of Irkutsk in eastern Siberia. The event will take place in the Mongolian capital Ulaanbaatar and finish on July 16th. Dunhuang, Gansu. The Soaring Dragon RacingTeam will compete in the event with a Chinese-made, self-developed Soaring Dragon Racing Model.

The event was hosted by the Russian Ministry of Sports, the State Sports General Administration, the Mongolian government, the National Sports General Administration Automobile and Motorcycle Center, the China Automobile and Motor Sports Federation, and the people's governments of the provinces (autonomous regions) along the way. A total of 10 special stages of 10 days. The total length of the race is 5008 kilometers, including 2593 kilometers in the special stage. New routes across 3 countries will bring new experiences and challenges to the drivers.

The competition, No. 243 (Peng Furen, Fu xinming), No. 245 (Chen Feng, Wang Yicheng), No. 249 (Zhang Peng, Tong Zhenrong) will drive a new generation of Soaring Dragon Racing Model. The team will also provide logistical support services for No. 239 (Di Weiyi, Yan Liming), who will run a team under the sponsor by American POLO Lubricants. At the same time, the road route, Germany RZOIL engine oil and Camorama as the sponsor partner of the team will continue to support the team in this race.

Before the start of the competition, the Chinese champion and pilot, who will play the team principle role first team of the Soaring Dragon Racing, said that the team formed a 32-person logistics team to play the 2019 Silk Way Rally and talked about the goal of the team. Ma Miao believes that it is to fully test the self-developed Soaring Dragon Racing car and the team team of the all-Chinese crews team. Through this competition, we will gain valuable experience for the team to participate in more overseas events in the future.

"The Silk Way Rally is the most extensive large-scale brand event in the world that exists in the world. The team has also developed a very clear strategy and plan for this competition. Not only the staff staying at home, this time there are 32 people. The logistics team played, together with the NO. 239 we provided service support and the three line-ups using the dragon racing, this one team can be assigned to a maintenance team of 4 people. In terms of group, Chen Feng and Peng Furen will compete for the T1 group, while Zhang Peng and Di Weiyi will participate in the modification of the wider OPEN group. The team is also coming to the goal of learning and challenge. The study is for the team and self-determination of the whole China class. The Soaring Dragon Racing has accumulated more experience in large-scale events and going abroad. Chen Feng, as the main driver of the team, has some goals in this competition, and the customer drivers are more based on experience. More important to them," said team manager Ma Miao.

Chen Feng, who participated in the development of the new Long-distance racing car, went to Russia for a three-day racing test in Inner Mongolia, and upgraded and optimized some minor problems in the previous race for the complex terrain of the event. Chen Feng said that the three-day test was not only very optimistic, but also showed that the Dragon Racing was improved compared to earlier this year.

"The Silk Way Rally is the only cross-continental large-scale off-road rally in the world at this stage. We also hope to test the dragon racing model in all aspects through this event and find more points for future development. In terms of performance, Instead of deliberately pursuing the rankings, I hope to compete with the first-class drivers to find out where we need to improve in the future. This is also a very rare opportunity. In addition, the line-up of the team's all Chineses based crews is also hopeful. Practice and build experience for future development."

For the first time this year, the Yunnan-based crew Peng Furen, who cooperated with the Soaring Dragon Racing, ranked among the top ten in the Taklimakan Rally that ended in June. The driver who used to compete in the all-terrain UTV race expressed his expectation in the Silk Way Rally. Accumulate more experience.

"SWR is my first time to participate in large-scale international competitions. Through the ring tower, this game has gradually found the feeling and confidence of driving a car. My navigator has provided me a lot of help. He has participated in many times of international competition. Although I still have a lot of places to learn, I believe this game can help me to improve and accumulate more experience. I will listen carefully to the advice given to me during the competition," said Peng Furen. .

Zhang Peng from Shanxi is the first time to cooperate with the team. In the past, he has participated in many competitions, and this event will also be partnered with the famous driver Tong Zhenrong. Before the race, Zhang Peng said that he would go abroad for the first time to participate in international competitions. For him to finish the race first, it is most important to stabilize.

"This competition is my first time to go abroad. I need to adapt to the terrain and landforms of Russia and Mongolia, and our car is a brand new one, so our strategy is to be stable, at least Before the desert stage in China, I would not go blindly to pursue speed. I have participated in the Silk Road in the past, but only in the domestic section," Zhang Peng said.

About SWR Events
According to the schedule, the administrative inspection and technical inspection will be carried out on July 5, and the starting ceremony of the competition will be held the next evening at the center square in Irkutsk. The Soaring Dragon Racing will go all out for the upcoming game. 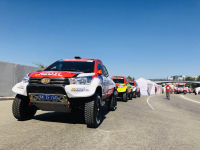 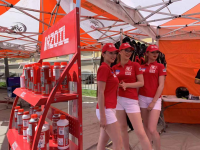