Guangzhou, China -- (ReleaseWire) -- 07/31/2019 --Huang Weiming, a famous animation director as well as the founder of Happytoon Animation Co., Ltd. is glad to hear that his innovative animation called Happy Friends becomes a hit among the global audiences. This is another success to him after a renowned animation called Pleasant Goat and Big Big Wolf was launched in 2005.

Happytoon Animation is a professional creative production company for animated TV series and movies. Happy Friends is one of the most popular ones produced. The firm has been awarded multiple times in the industry, including the 'High-technology Industry in Guangdong' in 2017 and the 'Outstanding Enterprise in Guangzhou' in 2015.

The high popularity of Pleasant Goat and Big Big Wolf makes Huang Weiming become a famous animation creator and director in China and abroad. Instead of indulging in the success in his career, he made up his mind to leave the company and found his own one to keep creating high-quality animations to the world. He believes that the passion for creativity is the most precious thing of a creator. Perhaps it was his persistence that led to his second success.

The popularity of Happy Friends is expanding rapidly among elementary and secondary schools. This animation mainly tells the story of five protagonists defending their planet from the alien invasion. These protagonists are supermen, full of kindness, justice, intelligence and bravery. The attractive and funny plot makes the audiences immersed in a happy and relaxing atmosphere. In comparison to Pleasant Goat and Big Big Wolf, the plot of Happy Friends is more complicated so that some independent thinking will be needed to understand the whole story. Furthermore, Happy Friends is more likely to have an emotional resonance with teenage audiences, because many teenagers used to dream of becoming a superman with magic power to punish the bad guys and promote peace. To some extent, watching Happy Friends fulfills these teenagers' dreams.

It should be noted that the process of creating an animation is not so easy and relaxing. It takes many people most of the time and energy to create a high-quality animation. One minute of Happy Friends viewers watch may equal a week of production by Huang Weiming's team. As for all the difficulties and challenges they have been through, Huang Weiming says that the reason why they keep going in anime field is that China's creative animations and cartoon images are still too few, while the demand in the anime market is still large. To Huang Weiming, Pleasant Goat and Big Big Wolf may be a good beginning, but Happy Friends will never be the end. 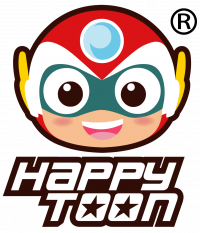