Inspirational Modern Folk Artist to collaborate on a music video for Acidfolk/Hip-Hop remix of "The Power To Be Alive" in the NY area.

New York, NY -- (ReleaseWire) -- 05/14/2013 --Jason Garriotte aka Chords of Truth released his debut album in the year 2012. It consists of 7 acoustic folk songs that pretty much came out of nowhere, and is not something Jason ever really thought he would be able to do.

There are just so many great songwriters out there and Jason has always felt like it would be near impossible for him to come up with anything original. However, after playing his own versions of classic cover songs for over 10 years, he finally decided to see what he could come up with.

Then through a series of events starting last spring, Jason’s original album of 7 songs has been transformed into a collection of 65 versions that span multiple genres and 10 albums. One of these new albums was with Cas Weinbren (aka The Chameleon). Cas took Jason’s original tracks and completely recomposed his songs into something they’re calling Acidfolk. For the track “The Power To Be Alive”, they have also teamed up with the rapper Man-u-iLL to deliver something really different. The team wants to share this song with everybody.

Cas and Jason have connected with a couple of video producers that are excited about working with this song, but right now they just don't have the budget to get it done right. The biggest hurdle at this point is the funding. They are appealing to all to help them share their music with everyone through a powerful, professional video by supporting this project. 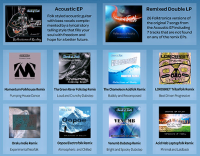