'A New Dawn', Christian Rock album by Cross Legacy is available for immediate download on the iTunes music store and comes with an iTunes exclusive Digital Booklet.

Bangalore, Karnataka -- (ReleaseWire) -- 10/28/2014 --Christian Rock band from India, Cross Legacy, release their debut album, "A New Dawn" today. The album is available for immediate download on iTunes - http://bit.ly/nwdwn. The band announced their new album with an iTunes pre-order a month ago on their official website, crosslegacy.com and on their Facebook fan page - www.facebook.com/crosslegacyband which has around 31K fans. The album release will be followed by the release of the music video of the album's first song, "Dawn of the New Generation". The music video is directed by Ebey Joseph who also directed the band's earlier video, "I Bow Down". The album, if bought from iTunes will include an exclusive digital booklet with lyrics of all the songs, liner notes and band pictures. The iTunes download also comes in the high fidelity "Mastered for iTunes" format. Physical CDs of the album will be available on Amazon.com.

The band, whose singles have charted in the iTunes Top 200 charts consists of Bijoy Thangaraj (lead vocals, guitars, keys), Billy Sunday (lead guitars), Dr. Amith Ramos (violin, keyboards, backing vocals), Isaac Theogaraj (bass) and Jagan Jayaraj (drums). The band did an opening performance for John Schlitt of Petra (4-time Grammy winner) in Bangalore on Feb 5, 2012. Followed by it, the band had an interview at Radio One 94.3, a popular FM radio station based in Bangalore. They released their first single, "Legacy" on February 12, 2012 and their second single, "I Bow Down" on August 30, 2013 along with a music video.

The band has been working hard on their debut album for more than 3 years. The band members say that It took so much time because they wanted each of their songs to be a masterpiece. The album is mastered by Justin Shturtz at Sterling Sound, NYC and the album cover art was done by Nikolai Lockertsen, who has an incredible résumé.

"This is my best production till date" - says Bijoy Thangaraj, who mixed all the songs in the album. Bijoy has also worked as producer for the Indian bands, Ehsaas and Scales 'n' Hammers and has collaborated with many artists around the world for songwriting and composing. One of the songs titled "Stand on His Word" from the album "A New Dawn" includes collaboration with Reggae artist, Madi Simmons for lyrics. The album also includes an Indian fusion mixed collaboration for the song "Love Revolution" featuring Aravind Nair from Scales 'n' Hammers.

"After years of working and re-working on our tracks, here we bring our brand new album." - says Billy Sunday, the lead guitarist who has put in amazing guitar solos in the songs, "The Crazy Times", "I Bow Down", "Sea Of Traitors", "Life and Death" and "Legacy". Billy is also the producer of the band, Salvation Creed.

The album also features the artists - Steve Alfred, Candice and Bianca. The band members are very excited about the release of their debut album. "A New Dawn" features Christian rock music in the lines of Skillet, Switchfoot, Newsboys etc. The band members' influences include classic rock bands such as Whiteheart, Whitecross, Petra and modern artists such as Newsboys, Delirious?, and Tobymac. 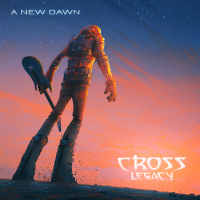