New York, NY -- (ReleaseWire) -- 11/20/2013 --Award-winning singer and PBS/WNET and NY affiliates Host for Andrea Bocelli “Live From Central Park” and “Il Volo Takes Flight" CRISTINA FONTANELLI brings her program of Italy’s best-loved songs, arias, Neapolitan and Christmas classics during her 10th-Annual “Christmas In Italy®” show at the BMCC Tribeca Performing Arts Center on Saturday, December 7 at 3:00 PM at the culmination of the Year of Italian Culture in the United States as designated by the Italian government. This year’s show will also honor living WWII veterans in memory of Pearl Harbor Day, December 7, 1941. Acclaimed actor Tony Lo Bianco will read a special memorial poem and PBS-TV’s Jim Masters will emcee. This year's show to benefit the Wounded Warrior Project.

Called a “vocal genius” by the New York Sun, Ms. Fontanelli’s show is a love letter to her Italian heritage and a tribute to her grandparents. “I decided to begin this annual Holiday tradition to preserve Italy’s great classic and popular song heritage and the values they represent and to teach them to younger generations.” says Ms. Fontanelli. The BMCC Tribeca PAC is located at 199 Chambers St. (between Greenwich and West Streets) in New York City. Tickets and information can be purchased through the box office at 212-220-1460 and online at http://www.smartTix.com. (Photo I.D. required to enter theater.) “Christmas in Italy®" will also take place for the 3rd year in San Diego, California on Friday, December 13 at 7:30 p.m. at the Museum of Contemporary Art San Diego in La Jolla. More information on Ms. Fontanelli can be found at http://www.cristinafontanelli.com and on “Christmas in Italy®" at http://www.cristinafontanelli.com/ChristmasinItaly.htm More Information on Mr. Lo Bianco: http://www.tonylobianco.com

Cristina Fontanelli is PBS host for Andrea Bocelli’s concert “Live From Central Park”, “Il Volo Takes Flight”, Vienna Boys Choir and Qi Gong specials. She appeared on CBS Weekend in interview/performance/co-hosting roles; (Cristina Fontanelli describes the show on this 2010 CBS Interview YouTube link: http://www.youtube.com/watch?v=9xDMoWNe1c4&feature=email) and performing the song “Time to Say Goodbye (Con te partiro)” from a previous “Christmas In Italy®” http://youtu.be/VNqNNqj2JxE . She has performed for Jimmy Kimmel’s “Feast of San Gennaro” in Hollywood; is the voice of “Nonna” on PBS Chef Lidia Bastianich’s animated Christmas special; and is the “voice” of Domino’s Pizza on the national radio commercial. She has performed for the Clinton White House, the Presidential Inaugural Ball in 2005, with The Boston Pops, the St. Louis Symphony, at Feinstein’s at the Loews Regency, has completed 3 world tours with the Mantovani Orchestra and has sung title roles with the Palm Beach Opera, New Jersey, New York Grand and Cairo Opera companies.

About Cristina Fontanelli
Brooklyn-born Cristina Fontanelli was awarded the OSIA Lifetime Achievement Award in the Arts (previous recipients include Luciano Pavarotti), has been cited as one of the top alumni of the American Academy of Dramatic Arts (along with Robert Redford, Anne Bancroft, Cecil B. Demille, Anne Hathaway et al) and has been named “Woman of the Year” by many Italian organizations throughout the country. She sings and entertains in 8 languages.

BMCC Tribeca Performing Arts Center is located at 199 Chambers St (between Greenwich and West Streets), New York, NY and tickets for “Christmas In Italy®” are sold through the Box Office at (212) 212-220-1460 and online at http://www.smartTix.com with tickets ranging from $40 to $62.50 (Group, senior and students discounts available). Tickets for the San Diego show are sold through 1-800-838-3006 x1 or http://www.brownpapertickets.com/event/448431. Ms. Fontanelli’s website is http://www.cristinafontanelli.com. Subways 1/2/3, J/Z, A/C to Chambers Street Station. 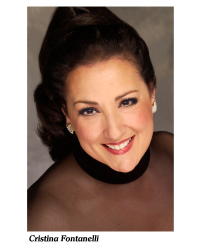 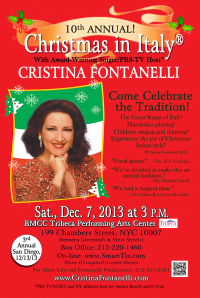