Santa Monica, CA -- (ReleaseWire) -- 01/28/2021 --Cineverity, an animation studio start-up, is launching its first Web-based series, Date With a View, on Valentine's Day 2021. Fans of indie, dialogue-driven movies such as Louis Malle's My Dinner With Andre, Steven Soderbergh's Sex, Lies, and Videotape, Spike Jonze's Her, the work of Jim Jarmush and French auteur cinema will be drawn to Date With a View.

This first series, containing six short-form episodes, features a first date encounter in a 2071 Paris restaurant between Pierre, a hopelessly romantic French artist, and Jane, a stunning android woman. The meeting between the two comes about through a revolutionary dating platform.

Pierre and Jane at first have very strong reservations towards one another. But at the end of an evening-long conversation engaging in topics such as social acceptance, creativity, longing and love, they end up seeing the world through one another's eyes.

In the four months following the release of Date With a View, Cineverity plans to release six new pilot episodes revolving around dating and relationships. And as in Date With a View, every upcoming series' episodes will feature a brief movie pitch. Embedded in the dialogue, these pitches target movie and publishing industry insiders looking for fresh and original ideas.

About Cineverity
The team behind Cineverity Animation Studios is comprised of Ivan Dutoit and Romain Alarie, who combine more than 30 years in the film and television industry. Mr. Dutoit has analyzed more than 5000 scripts and produced 6 feature films, while Mr. Alarie has directed 23 short films for the Canadian Broadcasting Corporation and produced one feature film. Both also have extensive expertise in cutting-edge technologies used in streaming platforms, such as AI analytics and digital distribution.

Cineverity's ultimate vision is to become, in the next three to five years, a major player in the animated fiction ecosystem. Through the quality and inventiveness of its series, the new studio will develop into the go-to hub for fans of bold and daring animated content. 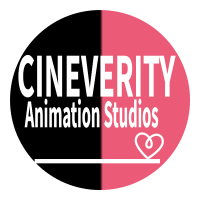