The famed orchestra conductor and the President of the Royal Music Society, Yuri Botnari, records Classical Masterpieces with the London Symphony Orchestra at the legendary Abbey Road Studious in London, UK.

This fantastic recording is to be released on May 27st, 2014. The best professionals from different countries have collaborated in this historic venture. They have recorded the masterpieces by Mussorgsky “Pictures at an Exhibition”, Prokofiev “Romeo and Juliet” in a new compilation by Maestro Yuri Simonov; Tchaikovsky: Pas de Deux from Nutcracker, Polonaise from Eugene Onegin and Waltz from Sleeping Beauty.

According to Yuri Botnari, “This was our first collaboration with the London Symphony Orchestra and it has been a wonderful experience from a creative standpoint. We have reached constructive understanding and I believe that we have received the remarkable result. It has been my pleasure to work with such a wonderful orchestra.”

This recording of Yuri Botnari is as an act of dedication to the prosperity of the high standards in the Classical Music as well as cultural diplomacy project that the Royal Music Society has always upheld as one of its primary objectives. The project has acted as a cultural bridge between the European conductor Yuri Botnari and the London Symphony Orchestra with the US Grammy producer Cristina Botnari creating beautiful recording of the most popular Russian masterpieces that will be presented to the people all across the globe.

The project was also supported by the Russian Music Society, the organization that is dedicated to keeping the Classical Music alive.

Yuri Botnari, who is also the General Producer of the album said, “ The preparations including the negotiations between the famous Abbey Road Studios, London Symphony Orchestra, engineers, copyright agencies, etc. took us with Cristina almost one year to make this project come true. The language of music is universal and is not limited by the geographical or language boundaries. Music transcends all borders and appeals to humans alike, irrespective of the countries to which they belong. We are happy that we had a chance to collaborate with highly professional musicians and this collaboration was successful.

Cristina Botnari, the Executive Producer of the project, has said: “Music has made it possible to make us feel universal, without borders. It was an amazing experience to be working with the best people in the industry. The eternal appeal of the classical music recreated by the orchestra of wonderful musicians will make history on the day of its release. And it is my honor to be a part of this musical history. We also would like to give special thanks to the people who helped to make this project happened: Mark Stevens, Arne Akselberg, Stephen Buck, Andy Smith and all LSO musicians, management and Abbey Rd Studios staff”

The month of release of the album coincides with the UK tour of Yuri Botnari and the famous Moscow Philharmonic Orchestra – May 6- 25. Keep a watch on iTunes and Amazon for pre order bookings.About–

About Cristina Botnari
Cristina Botnari is a Classical music industry professional and a qualified musician. She wears many hats of an artist, performer and producer. Holding 2 Master Degrees from prestigious Universities, Cristina has extensive experience in Governance, Production, Organization, Marketing, PR and other aspects of the industry. She is the Executive Producer for the Russian Music Society record label and one of the Founding Directors of the Royal Music Society Foundation as well as the host of the Classical Music Hour radio program on www.i-netradio.com For more information, visit her website at http://www.cristinabotnari.com 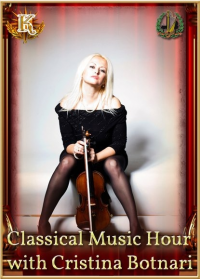 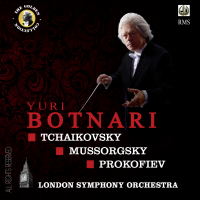