Linwood, NJ -- (ReleaseWire) -- 06/25/2020 --Clay's Climate Control—a family-owned and operated HVAC company that serves southern New Jersey—hosted an air conditioning giveaway contest throughout the month of May, and on June 1st, they announced that the lucky winner was Kristy Dennison. Kristy typically works at the Cape May Court House Surgery Center, but due to the coronavirus pandemic, this surgery center has been temporarily closed. However, Kristy didn't waste any time finding a new place for her to give her services to and get involved, so the day after the surgery center closed, she immediately went to work in the Intensive Care Unit (ICU) at AtlantiCare in Atlantic City, NJ.

This contest was set up because the owners at Clay's Climate Control, Clay and Jen Pierce, wanted to thank the frontline healthcare workers for all of the work they have been doing to fight the spread of COVID-19. On May 1st, 2020, voting was opened and nominations were sent in throughout the entire month. After reading Kristy's nomination letter, which was submitted by Michael Davis, it was clear that she is an exceptional individual who has gone above and beyond during the COVID-19 pandemic.

"[Kristy] could have sat back and collected unemployment or waited for AtlantiCare to send her some place else, but instead, she reached out to the ICU where she spent 10 years and where her talents could be best used to help those in this time of need," stated Davis in his nomination letter. "[Kristy] has been working 4, 5 and 6 days a week since the shutdown and has offered to pick up shifts, days and nights, in Atlantic City or Mainland or wherever the need has been."

In addition to putting in countless overtime hours during the coronavirus crisis, Davis also acknowledged the fact that Kristy gave up her Mother's Day to work in the ICU. She made this decision after learning that the emergency room was "bursting at the seams" and was also anticipating an increase in COVID-19 patients from a nursing home.

According to Davis's nomination letter, Kristy's home "has an AC unit that is 30-years-old and has had an issue each season," forcing her to waste her money on repair after repair. Clay and Jen knew that this was a person who was not only deserving of being recognized for all of her hard work, but was also deserving of a new air conditioning unit.

"We were fortunate to be able to continue working through COVID-19 as an essential business," said Jen Pierce, owner and General Manager at Clay's Climate Control. "Giving back and recognizing the heroes in our community was very important to us, especially during this time." Jen commented that they received many nominations throughout the month for healthcare workers who were doing their best to keep people safe and were deserving of winning. However, she went on to explain that the judges who picked the winner "chose Kristy because of the selflessness she showed. After reading her nomination letter, we were equally as excited to replace her 30-year-old unit and let her know how appreciative we are of everything she's been doing for others throughout this pandemic."

Clay's Climate Control is no stranger to giving back to its community. In fact, they are an avid supporter and donor to the National Court Appointed Special Advocate (CASA) Association—a cause they have been supporting for five years and donated $10,000 to last year. Additionally, in September of 2019, they set up a giveaway contest similar to this one where they gave away a free furnace installation to a first responder. It is clear that Clay's Climate Control is there for its community in many ways and is always looking for ways to give back to those who go above and beyond to keep the community—and the people in it—safe.

About Clay's Climate Control
Clay's Climate Control LLC is a family-owned and operated company located in Linwood, NJ. The company was founded by Clay and Jen Pierce in 2001, and they provide professional, stress-free HVAC repair, maintenance and installation services.
https://claysclimatecontrol.com/ 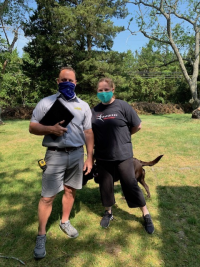