Stratford, CT -- (ReleaseWire) -- 10/05/2017 --A coming-of-age drama collides with horror in "The Girl Inside", the tale of a sixth grader, Kiko, who suffers from Dissociative Identity Disorder Demonic Possession. Told from her perspective through an aesthetic, post modern lens, including poignant animation and distorted images, the film is not only an exploration of the mind and the senses, but a siren call for mental health awareness.

The film takes place at Kiko's school, where the student body, teachers, and staff are snowed in by a blizzard. Kiko's "demon" emerges and possesses her body, seeking vengeance upon those who have tormented her, and those who chose to look away. Kiko is powerless and cannot prevent the ruthless punishment the demon metes out.

The viewer experiences Kiko's horror and helplessness against her mental illness, transposed into a kaleidoscope of live action, animation, reflections, distortions, and other visual elements, along with what promises to be a breathtaking, heart stopping soundtrack.

"The Girl Inside" is an ambitious project that incorporates a brutal viewpoint rarely explored in film. It not only encompasses the true spirit of independent film, but addresses a societal issue - mental illness - in a way that fosters empathy. It is when we are fully able to understand a perspective that humanity is able to effect the greatest social change.

The project is currently running a crowdfunding campaign on Kickstarter. Backers can receive anything from a copy of the final film and paraphernalia, to the opportunity to see the finished film at a special screening in New York, complete with Q&A. Some backers will even get a walk-on role in the film itself. "The Girl Inside" crowdfunding campaign can be found on the official Kickstarter page.

About Paula Plazas
Paula Plazas is a published fiction author and ranked in 2000 as one of the most promising Colombian talents of her generation by Revista Semana, the number one magazine in Colombia. She was also the youngest screenwriter to win honors at the "Premio Solinas" international screenwriting competition in Rome. Prazas has appeared in plays and films, and her script, "Colombianitos" was selected by HBO for the "Art of the Short" Panel at the New York International Latino Film Festival. 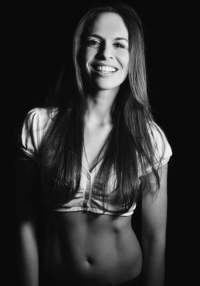