Columbus, OH -- (ReleaseWire) -- 10/03/2014 --Only in the digital age could a 20th century inventor dedicated to distributing free electric power become a modern day revolutionary by way of an app. Nikola Tesla has taken center stage in a 3D push for sustainable energy thanks to the help of Brian Yetzer, CEO of Yetzer Interactive Design, LLC. Yetzer has harnessed the power of Augmented Reality (AR), art, smartphones and tablets to create the Nikola Tesla app. Users need only stand in front of an art poster embedded with interactive 3D animation and flip the app’s virtual switch. Art, quite literally, then comes to life and so does the veritable Mr. Tesla’s vision.

The subject of a fully-funded Indiegogo crowdfunding campaign, the app and its corresponding interactive posters up the ante on the ‘edutainment’ experience. By way of 3D animation and the video playback of short documentary films the Mobile Augmented Reality (MAR) app brings awareness to Tesla’s dream. The dream of a world with free, renewable energy. Helping to make this dream a reality via education, the Nikola Tesla app will be highlighted at the Lumos Columbus Gallery opening on Saturday, October 4th.

Yetzer said, “Yetzer Interactive Design thanks Lumos Columbus for helping us show what we can do with educational AR. With the full support of the Tesla Science Foundation of Philadelphia our company will use AR, MAR, apps, education and fundraising to get Tesla’s work seen. His thoughts on renewable energy can influence our survival.”

Dedicated in every regard to Tesla’s influential work, a portion of each sale in the newly launched Yetzer Interactive Design online store will support the cleanup of Nikola Tesla's Wardenclyffe laboratory and the development of the Nikola Tesla Museum in Shoreham, New York. 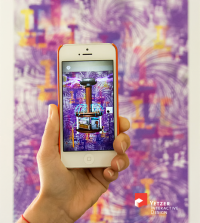 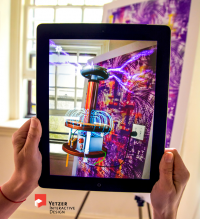