NASA forecasts that Planet Earth could possibly get hit by a skyscraper-sized asteroid named Bennu, resulting in the creation of a five-mile-wide crater. The Comet Research Group is looking for funding support to accurately assess the effects of such impacts, and provide information that may help avert similar situations in the near future.

Raleigh, NC -- (ReleaseWire) -- 11/15/2016 --It is extremely disturbing to know that Earth is directly in the path of about 500,000 asteroids and comets. Unfortunately, NASA and other space agencies don't know the location of 498,000 of them! Yet, these killer comets are capable of causing explosions far worse than the world's largest atomic bombs. Chelyabinsk, a small city in Russia, experienced such as incident in 2013 that seriously injured around fifteen hundred people. NASA warns that an asteroid named Bennu may hit Earth within a few decades. If so, the impact would be powerful enough to destroy any one of the world's largest cities.

The Comet Research Group is a non-profit organization collaborating more than 60 scientists from sixteen countries all over the world. The discoveries made by the group members have been featured on the History Channel, National Geographic Channel, Discovery Channel, PBS's NOVA, and many other television channels and programs. The group's mission is to

- Accurately assess the hidden effects of comet impacts on human history
- Educate the international public about these effects
- Provide governments with the necessary information to stop future comets from hitting Earth.

One of the upcoming projects from the Comet Research Group is the "Sunken Crater Expedition." This is an initiative to explore a recently discovered offshore crater in the Gulf of St. Lawrence, just south of Quebec, Canada. According to some scientists, this crater was created 12,800 years ago by a massive comet swarm that pushed millions of mammoths into extinction. To figure out what actually happened at the site, the Comet Research Group plans to collect melted rocks, including tiny diamonds.

Unable to get government funding after repeated attempts, the Comment Research Group is appealing for mass support to combat the danger of killer comets. A group spokesperson recently warned, "The chilling news is that Earth is now in a centuries-long episode of increasing bombardments by the shattered remains of a giant comet, one that has hit us again and again for thousands of years. We need to be much better prepared, and you can help us."

To find out more about this campaign, please visit http://bit.ly/2f6EzLm

The website of the Comet Research Group is http://cometresearchgroup.org/

About The Comet Research Group
This is a non-profit corporation that collaborates with 63 scientists from 55 universities in 16 countries. Their discoveries have been featured on the History Channel, National Geographic Channel, Discovery Channel, PBS's NOVA, and more than a dozen other TV programs. Their mission is to accurately assess the effects of comet impacts on human history, to educate the international public about these effects, and, ultimately, to provide world governments with the information they need to stop comets from hitting Earth in the future. 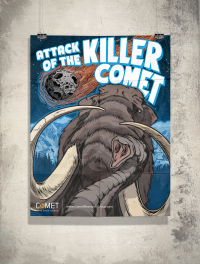