Dublin, Ireland -- (ReleaseWire) -- 08/08/2019 --The Irish-founded personal mental wellness app, KeepAppy has reached it's funding target and will go ahead with development for January 2020 launch. Designed to empower users to take control of their mental wellbeing, KeepAppy enables people to track all of the vitals that most impact on their wellbeing, increase self-awareness and engage in positive behaviour practices. With eight different features, KeepAppy is a complete wellness toolkit which allows the user to choose whichever technique suits them best.

The World Health Organisation reports that 1 in 4 people will experience mental illness in their lives yet two thirds will never seek professional care or do anything about it. Coupled with the stigma surrounding mental illness or 'unwellness', the lack of knowledge and awareness about wellbeing techniques has led to a subsequent lack of access to wellness.

The cornerstone of KeepAppy is on being functional, approachable and accessible for everyone and is targeted towards Gen Z and millennials who are smartphone oriented and have a high level of wellness awareness. KeepAppy's features are focused on empowering, educating and cultivating a wellness oriented lifestyle, through three primary mechanisms:

What sets KeepAppy apart from the myriad of wellness apps available on the market is the team behind KeepAppy's genuine intention to make a difference in removing the stigma around mental 'unwellness' and providing safe access to wellbeing. Unlike other wellness apps, KeepAppy will never give away their users' information. Dedicated to making a positive social impact, the team has also developed a 1 for 1 model so that users who subscribe to the full version of KeepAppy will also gift a lifetime subscription to someone in need, chosen by KeepAppy's partnered mental health and crisis helplines.

At the heart of KeepAppy is its co-founder and CEO, Aimée Louise Carton. Aimée is a young entrepreneur who has experienced mental illness firsthand. From Borderline Personality Disorder to PTSD, Aimée has suffered extreme suicidal ideation and almost attempted to take her life.

During her recovery, as a millennial, she wanted to practice different wellness techniques on her phone, however the only options she could find were meditation focused. KeepAppy addresses that gap in the market by creating an alternative digital preventative wellness toolkit which users can access safely.

Speaking on the success of the KeepAppy Kickstarter campaign, Aimée-Louise Carton said:

"We are so thrilled to have achieved our Kickstarter funding target. Our mission is to make wellness accessible and available, while also empowering, educating and cultivating wellness for all in a digital and innovative way. Through Kickstarter we're giving people the opportunity, not just to support further expansion of the App in the coming months, which include mindfulness, community challenges and gamification features through our Keepies, but to become a champion of the KeepAppy movement!"

About KeepAppy
Co-founded by Aimée-Louise Carton and Will Ben Sims, KeepAppy is the personal wellness app that is on a mission to make wellness fun and accessible for all. KeepAppy has successfully pitched and won several competitions, including qualifying to represent Ireland in Silicon Valley at the Enactus World Cup this September. Born as a result of Aimée's recovery after a suicide attempt, KeepAppy equips users with a personalized multi-featured preventative toolkit that aims to empower, educate and cultivate users towards a wellbeing oriented lifestyle by putting wellness in their pockets. 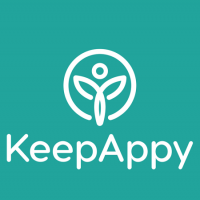