Congressman Cummings' presence on Capitol Hill is critical and invaluable. His passion for criminal justice, sentencing, and prison reform in America is right in line with that of A Just Cause. Congressman Cummings has been outspoken concerning the killing of unarmed African-American men, and he does not shy away from the issues that others have ignored altogether. He has publicly addressed the killing of Michael Brown, Eric Garner, and Freddie Gray. Congressman Cummings uses his platform in Congress to address the blatant discrimination that exist throughout America, and he vigorously fights to change it. He is respected in the African-American community and by his colleagues in Congress for the stand he takes in national, state and local politics. Congressman Cummings is dedicated to opposing injustice whenever it rears its ugly head and he advocates for those, who otherwise, would not be heard.

"In a time of uncertainty and fear, given the actions of the current Administration, Congressman Cummings has proven to be the voice of the American people, "says Lamont Banks, Executive Director of A Just Cause.

Congressman Cummings currently serves as the Ranking Member of the committee on Oversight and Government Reform. As the main investigative committee in the House of Representatives, Oversight and Government Reform has jurisdiction to investigate any federal program and any matter with federal policy implications. As the Committee's Ranking Member, Congressman Cummings fights to hold the Presidential Administration to a high standard of excellence and to ensure efficiency and effectiveness in the actions of the government of the United States. He also seeks to identify appropriate reforms that prevent waste, fraud and abuse and that ensure government programs meet the needs of the American people." ... "Congressman Cummings is also a senior member of the House Committee on Transportation and Infrastructure, serving on both the Subcommittee on Coast Guard and Maritime Transportation and the Subcommittee on Railroads, Pipelines, and Hazardous Materials." (https://cummings.house.gov/about/full-biography)

"We have found the response is amazing from our 26 million plus listeners, because the information discussed on our show and what they're hearing directly from our elected officials, is simply not promoted in the mainstream media. Amid the current chaos happening in Washington, AJC Radio is honored to be an ally for our elected officials voices to be heard in a genuine way across America." Says, Lamont Banks, AJC Radio Host.

"AJC Radio intends to keep our listeners informed more than ever in 2017. There are many new faces on the Hill, and AJC Radio hosts intend to meet with and interview as many as possible for new, exciting and informative Spotlight on Capitol Hill segments," says Banks. We're committed to corresponding with the Congressmen and Senators who want to share their personal stories, and convey the dedicated work they do for the American people," explains Banks.

"AJC Radio is dedicated to supporting our elected officials by recognizing their contributions to the American people. It's an honor to recognize a distinguished and dedicated advocate of the people we have in Congressman Cummings. Tune in to AJC Radio this Thursday to hear our exclusive interview, and learn about all the positive things he has done, and continues to do in his district, and for America," concludes Banks.

About Congressman Elijah E. Cummings
Congressman Elijah E. Cummings was born and raised in Baltimore, Maryland, where he still resides today" ... "Congressman Cummings has dedicated his life of service to uplifting and empowering the people he is sworn to represent. He began his career of public service in the Maryland House of Delegates, where he served for 14 years and became the first African American in Maryland history to be named Speaker Pro Tem. Since 1996, Congressman Cummings has proudly represented Maryland's 7th Congressional District in the U.S. House of Representatives." (https://cummings.house.gov/about/full-biography)

Please join us as we highlight the accomplishments of Congressman Elijah Cummings on this week's show. Call into the live show at (646-200-0628). As always, we welcome your questions and comments. 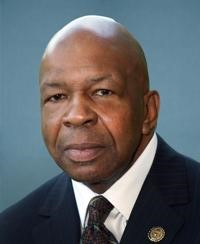