"AJC Radio's dedication for the support of our elected officials, and making known their contributions to the American people is unmatched. It's an honor to recognize another dedicated and distinguished advocate of the people we have in Congressman Gregory Meeks. Tune in to AJC Radio this week and learn about all the positive work he has done, and continues to do as he proudly serves the constituents of New York's Fifth Congressional District in the U.S. House of Representative," says Lamont Banks, AJC Radio Host.

"Congressman Gregory W. Meeks, now in his tenth term, has devoted his energy and skill to serving one of the most diverse constituencies in the nation. His efforts on behalf of his district, New York City and State, and the nation have earned Rep. Meeks the respect of his constituents, New Yorkers, and Democrats and Republicans alike. He is known for being an effective, principled, and common-sense leader. As a fervent supporter of the Affordable Care Act enacted under President Obama, Congressman Meeks believes that it should be enhanced. Congressman Meeks is one of sixty-one forward-thinking, pro-growth Democratic members who comprise the New Democrat Coalition (NDC). He co-chairs the NDCC Trade Task Force."

Congressman Meeks is serious about America's advancement, and reaching our full potential. He doesn't hold back when expressing legitimate concerns regarding an obvious disconnect between the White House, and most Americans. When addressing travel and trade with Cuba, Congressman Meeks stated, "President Trump is out of touch with our allies in the Western Hemisphere and globally." Recent events have shown that Congressman Meeks was spot on when he made that assessment this past summer. Since that time, the world has watched in disbelief as the President fuels one fire after another. On another occasion, Congressman Meeks distinctly stated, "President Trump continually breaks his promises to hard-working Americans and this budget is no exception. He pledged to not cut Medicaid, but his budget shrinks it by $1.4 trillion. He swore he would protect everyone, but he's cutting Children's Health Insurance Programs. He promised to strengthen the middle-class, but he's hollowing it out. In fact, the President's misguided budget only helps one group: Trump's ultra-wealthy friends who will receive massive tax cuts."

"Congressman Meeks' compassion and ability to collaborate are rooted in his upbringing... He grew up in a public housing project and knew in his early years that he wanted to be a lawyer. He was inspired by a mother and father who worked hard to ensure that their children would have opportunities for advancement that they never did. Meeks' parents passed on to him a profound sense of social justice, commitment to community, and willingness to extend a helping hand to those in need." ... "Congressman Meeks is a member of the Allen AME Church in St. Albans, New York and a proud member of Alpha Phi Alpha Fraternity. As a huge sports fan, Meeks enjoys watching the New York Knicks, the New York Jets, and the New York Mets. He is married to Simone-Marie Meeks and has three daughters – Ebony, Aja, and Nia-Aiyana."

Join AJC hosts as they highlight the accomplishments of Congressman Gregory Meeks on this week's show. Call into the live show at (646-200-0628). AJC Radio hosts welcome your questions and comments. 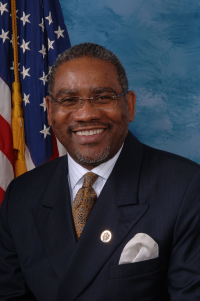