Woodmere Sonicboom Escapes Slaughter to Work With Veterans With PTSD

Marlton, NJ -- (ReleaseWire) -- 12/23/2020 --As the holiday season approached, it looked as though Woodmere Sonicboom – a former racehorse that had, earlier in his life, performed in nearly 250 races – was at the end of the line. Then a donation from Marlton, NJ, law firm Console & Associates did more than give him a second chance. It allowed the horse to help others as part of the Equine Therapy Program for Veterans.

The 18-year-old retired racehorse was on his way to the slaughterhouse when, on November 18, 2020, Console & Associates made the donation that would free him from the kill pen.

"It's horrifying that a majestic animal like Woodmere Sonicboom, who has so much life in him and so much affection to share, would be sent to a slaughterhouse," said Console & Associates founder Richard P. Console, Jr., who is well acquainted with the tragic end that most retired racehorses face. In 2019, the firm gave a similar gift that helped save the life of Voiage, another former racehorse who was on his way to a kill pen.

This year, the stakes were even higher. The Forgotten Angels Equine Rescue in Medford, the nonprofit organization that had coordinated Voiage's release and was now working to do the same for Woodmere Sonicboom, had partnered with SpectraCare Foundation to launch its Equine Therapy Program for Veterans. With his affectionate temperament and likely a decade or more of his natural lifespan left, Woodmere Sonicboom would be a perfect addition to the veterans' therapy program. The only problem was securing the funding to "bail" the horse out of the kill pen before it was too late.

"Not only was Woodmere Sonicboom's life on the line, but so was all of the potential this horse has to make a difference in the lives of the veterans to whom we all owe our freedom and so much more," Console said. "Instead of being slaughtered needlessly, this horse will bring peace and healing to countless veterans. It's a good reminder of the power of giving, especially during the holiday season, and of how even the smallest acts of charity can make an impact so much bigger than we can predict."

With the COVID-19 pandemic hampering Forgotten Angels Equine Rescue's fundraising efforts throughout 2020, the organization needed support immediately if it was going to change the retired racehorse's fate from certain death to a life of bringing comfort to others. Console & Associates' November donation helped save Woodmere Sonicboom just in time for Christmas.

While Woodmere Sonicboom's life has been spared, other former racehorses aren't so lucky. Forgotten Angels Equine Rescue, which has saved 310 horses to date, is still accepting tax-deductible donations toward the rescue and care of other horses who, like Woodmere Sonicboom, are headed for the slaughterhouse.

About Console and Associates P.C.
Since Richard P. Console Jr. established the firm in 1994, his mission has been to help accident victims across New Jersey and Pennsylvania get the compensation they deserve. Today, the multi-lawyer firm handles personal injury matters exclusively, assisting clients with injury claims ranging from car accidents to slip and falls and dog bites to instances of medical malpractice. Over the firm's 26-year history, its attorneys have cultivated a reputation throughout the region and beyond for successfully getting results for their clients. 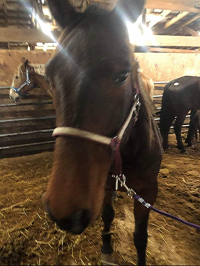