“We asked Robert to join the Cornboard Team, not only because of his amazing talent, but also because he shares the Cornboard values of being eco-friendly and doing what’s right for the environment,” said Cornboard CEO Lane Sergerstrom.

About Robert Richardson Jr.
Robert Richardson Jr., a McKinney Texas native, started his racing career in 2001 and has been a Nationwide Series driver since 2007. “ I believe it is extremely important that we align ourselves with companies that are bio-diverse and act as good environmental stewards, on and off the track” Richardson Jr. said. Cornboard is on the cutting-edge of green, sustainable design, which is very important to me.”

About NASCAR
NASCAR is a leader in green initiatives, not only across all motor sports, but in the business community, as well. “We are excited about NASCAR’s ‘Go Green’ initiative and know that sponsoring Robert Richardson Jr. is a great opportunity to continue to raise awareness about the importance of eco-friendly choices,” Segerstrom said.

About Cornboard
Cornboard is a wood renewable eco-friendly alternative to pressed wood. Corn-stover is combined with resin and bonded under heat and pressure. It can be used in thousands of applications from building materials to consumer products. Cornboard can be engineered and designed specifically for the application, “it’s what you want it to be.” Says Segerstrom. 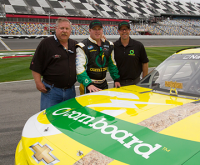