Nashville, TN -- (ReleaseWire) -- 10/23/2014 --With a gutbucket baritone that brings to mind Waylon Jennings and Jamey Johnson, James Carothers delivers stirring and hard-hitting songs of real life on his latest release, HONKY TONK LAND (Renegade Mountain Records). A tour-de-force of traditionalism, the eight-track offering features seven Carothers' originals, and takes the listener back to a time when songs of life's triumphs and struggles filled the Country airwaves. The disc, produced by Carothers, is available for purchase now at iTunes, Amazon, Amazon UK and GooglePlay.

The newcomer's latest single, "I Must Be Alive," lands at Country radio today via PlayMPE and programmers can also find it at AirPlay Direct. With honest simplicity, the vocals evoke the emotional gravitas of Haggard, and Carothers' words carve deep into the soul:

"I Must Be Alive" is just one of the compelling tracks on HONKY TONK LAND. Standouts include the opener, "New Country Singers," a soft smack-down on the "lightweight Pop/Country tailgater" type of vocalist so predominant on today's airwaves. James sums up his feelings for their "Bro-country utopia" succinctly, singing "They don't drink near as much as me."

His smoky morning-after vocals make "Mississippi Clay" as mysterious and riveting as Bobbie Gentry did in '67 with "Ode To Billie Joe." The title track revs things up with a tale of bad women and late nights on the road, and the teasing fiddle and hot guitar make the cut a chase for that neon rainbow. "Trouble In Paradise," written by James' father, is a Country man's take on a dying marriage and the timeless battle between good and evil.

About JAMES CAROTHERS
A native of McNairy County, Tennessee, home of Walking Tall icon Sheriff Buford Pusser, James spent his boyhood leading the a cappella choir at the local Church of Christ before the family moved out west. This laid-back entertainer now lives with his young family in Los Alamos, New Mexico. A favorite in the honky tonks and casinos of the Southwest and throughout the Midwest for the last several years, James is now considered a star in the making by some of the music industry's top media pundits. Carothers comes by his Country style honestly, counting Waylon, Willie, Merle and Johnny Cash as major overall influences, while naming Keith Whitley and George Jones as inspirations for his distinctive phrasing and singing. As a writer, he admires the talents of Billy Joe Shaver and Hank Williams. A talented lead guitar player ala Vince Gill, James is an engaging entertainer who leaves his audiences clamoring for more after every show. 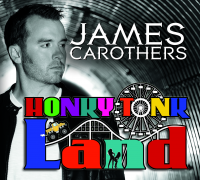