CLEVER GIRL, the latest series from producers Sherrie Allyn, Kip Bennett, and Myra Zimmerman Grubbs of Brand Old Productions is the story of Denise Dobkin (played by fresh face Tifani Ahren Davis), a journalist for a small paper who falls in love with charming pianist Chris Schaefer (played by the multi-talented Kip Bennett). Chris is everything Denise has ever wanted in a man; charming, sensitive, caring. There's just one problem: Chris is also a serial killer. As murder becomes the couple's turn on and shared pastime, the ripple effect of their dark secret becomes ever more bloody.

"After closing a deal with Global Genesis Group for our film '75', I am thrilled to partner with them on a second project," said Producer Myra Zimmerman Grubbs. The first season of CLEVER GIRL contains 9 episodes and is now complete and ready for delivery.

With the hard-hitting realism of the popular podcast SERIAL, and in the bloody vein of DEXTER, the series CLEVER GIRL makes murder seem normal. Like the voyeuristic and dangerous DON'T BREATHE, when everyday people are confronted by serial killers, the strangest things can happen. The series generated major buzz by accumulating an unprecedented 40 awards during its time on the festival circuit.

Charles Morris Jr., VP of Development of Acquisitions, said, "Clever Girl is an expertly-crafted tale of ordinary people in an extraordinary situation. The uniqueness through which dark themes are explored is truly captivating. Global Genesis Group is excited about what the future has in store for Clever Girl." 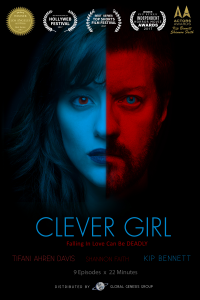