CrocoChess enables everyone to learn chess the fun way in 2 easy steps with the fun, crocodile invaded game.

3. Real – Parents who worry their child is behind a screen all day, don't need to worry anymore. CrocoChess is a real, physical board game, made to have fun together.

CrocoChess launches its crowdfunding campaign on Indiegogo, May 11, 9 AM PDT.

A group of proud parents and smart kids introduce CrocoChess Spring 2018, a game designed to teach chess in a fun way. CrocoChess is designed to catch the interest of children as young as 3.

Why teach young children with chess? Studies by Dianne Horgan, Ph.D., dean of the graduate school of counseling, educational psychology, and research at the University of Memphis, has found that chess is immensely helpful in brain development, especially when a child learns how to play at an early age. It also improves a child's visual memory, attention span, and spatial-reasoning ability. Chess develops not only a child's intellect but other aspects such as creativity, sportsmanship and concentration.

CrocoChess is for children, made by children.

In fact, the game was co-created by Christiaan (7) & Matthias (5) and further developed together with the families of Vincent Goutorovitch and Jody Rider.

However, the misconceptions about chess have kept the board game away from a broader audience, thus depriving its potential benefits to the players. With the vast number of benefits in mind, the creator of CrocoChess incorporated fun in its design that will ignite children's curiosity. With its added luck feature, children have a higher chance of winning.

A game of CrocoChess can be played within 15 to 30 minutes.

CrocoChess Junior (3–5 yrs.)—The goal of the game is to reach the other side first.

Mr. Croco is introduced to increase the fun and luck feature. Children learn about movement, castling, strategy, different strengths, and defense. CrocoChess Junior can be played within 15 minutes. The fun factor increases focus. A great mental exercise for young children and fun with Mr. Croco for the youngest.

CrocoChess Dice (6–7 yrs.)—A dice is added for variation and allows children to skip a move, play with the opponent's pieces, or turn the board. The learning objective is to introduce children to the concepts of check and checkmate. CrocoChess Dice can be played within 30 minutes. This version adds more flavor and difficulty than the Junior version and prepares for traditional chess.

Those interested can back CrocoChess Indiegogo Campaign today. Early supporters can take advantage of the Catch Wave 1 and receive a -24 hours only- 50% off: $15 for the coolest chess game. 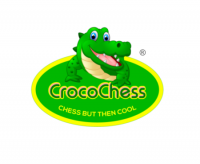